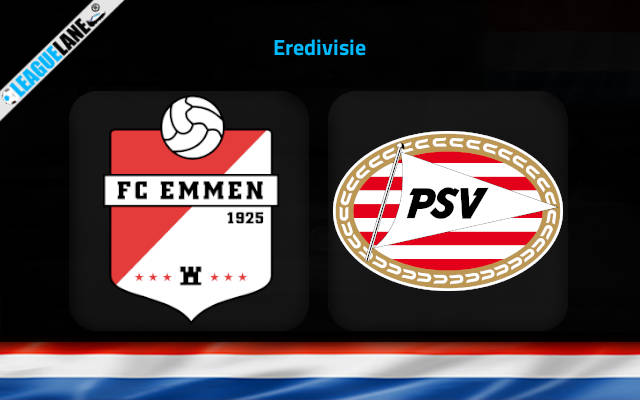 FC Emmen vs PSV Eindhoven Predictions and Free Tips from our expert tipsters when the teams go head-to-head in Dutch Eredivisie on Tuesday, 24 January 2023.

PSV have always been one of the best teams in the Dutch top flight, and this season as well they are in hunt for at least a top-three finish. Currently they need just a surplus of three points to climb to the top of the table.

Meanwhile, Emmen are one of the worst, and are placed in the relegation zone at the moment. They have just two wins to their name all through the campaign, and their only win this season at home came five months back.

The latest encounter ended in a 4-1 win for PSV, and they are also on a three-game winning streak. They scored eight goals in the process.

Importantly, they have a 100% unbeaten record this past decade – and barring two draws, it becomes a 100% winning record.

Who will win the match between FC Emmen and PSV Eindhoven?

Eindhoven have a perfect unbeaten record in h2h clashes – and barring just two draws, it would be a perfect winning record. They are also one of the major contenders to secure a top-two finish this season, while counterparts Emmen are contenders to get relegated.

Surely expect a win for titans PSV this Tuesday.

PSV scored 45 goals from their 17 games so far, and only Ajax have scored more goals in the entire competition.

Going in, Eindhoven scored two or more goals in all but one of their h2h encounters in the past decade, while only three squads in the entire league conceded more than Emmen.

Chances are quite high for goals to come in plenty this game week.

Emmen were able to score just a single goal from their past three league fixtures, while PSV kept clean sheets in two of their former three Eredivisie match-ups.

On top of that, Emmen have a single goal to their credit from the last three years.

It appears that the possibility is low for Emmen to find the back of the net against an in-form Eindhoven.

PSV have a near-perfect h2h record against this opponent, and currently they are on a superb stretch of performances in the Eredivisie. They are in line to secure a podium finish.

Meanwhile, Emmen are on a course to get relegated, and were able to record just two wins so far. They are placed 16th in a table of 18, and are in no shape to take on one of the titans of the league, who are in supreme form.

Going on, Eindhoven are scoring goals in plenty at the moment – 45 from just 17 games so far. They also scored two or more goals in all but one h2h clash till now.

Meanwhile, only three other teams managed to concede more than Emmen in the whole Dutch top flight.

Likely, goals are expected in plenty, and as such the Over 2.5 Match Goals at an odd of 1.67 would be a nice second tip here.