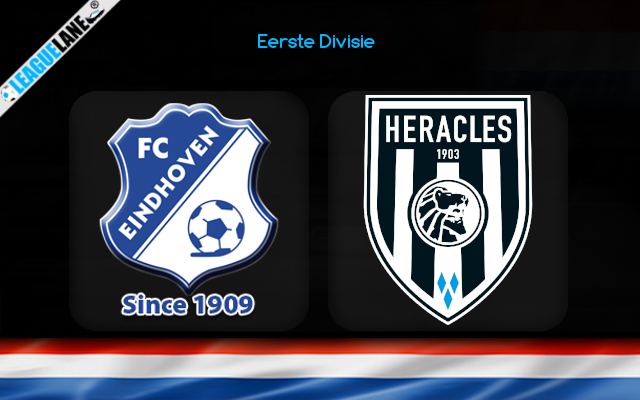 FC Eindhoven vs Heracles Predictions and Free Tips from our expert tipsters when the teams go head-to-head in the Dutch Eerste Divisie on Friday, 27 January 2023.

Going, both teams have dropped points in a couple of fixtures lately. Eindhoven is currently points level with Almere at fourth. Therefore, they will be hoping to seal a win from this fixture to secure their spot.

Heracles have been the dominant force in the recent history of this match-up. The reverse fixture had ended in a 3-0 win for Heracles.

At this venue, Heracles are on an unbeaten run since September 2000. their most recent league meeting was on 2005 and the match finished in a 6-0 win for the guests.

Who will win the match between FC Eindhoven vs Heracles?

Heracles were unbeaten in seven of the past 10 away matches. Six of them were victories. Meanwhile, FC Eindhoven were winless in three of the past six home matches.

Moreover, Heracles have a slight edge over FC Eindhoven in their h2h match-ups at this stadium. In that case, we expect a win for Heracles on Friday.

The recent matches of these two at respective patches saw the landing of over 2.5 goals ft. In fact, the exceptional attacking side of Heracles is more than enough to expect a goal-fest here. Thus, we expect this match to have goals over 2.5 ft.

Both the teams are having an average defensive line. The competitive character of this match, especially the firepower of both sides inclines us to consider the possibility of a both teams scoring display.

Heracles are just three points away from PEC Zwolle, sitting at the top of the table at the moment. They have only one aim at present, to climb past Zwolle to take possession of the top spot.

And it seems that they are capable enough to seal a win here against FC Eindhoven. We are backing them to win at 2.25 odds and are also expecting a both teams scoring affair at 1.73 odds.