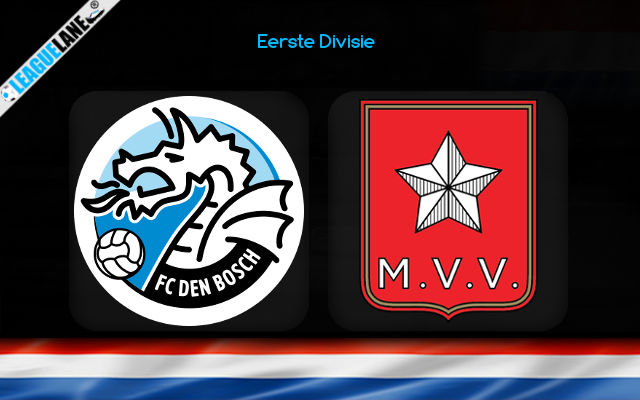 FC Den Bosch vs MVV Maastricht Predictions and Free Tips from our expert tipsters when the teams go head-to-head in the Dutch Eerste Divisie on Friday, 27 January 2023.

FC Den Bosch have been struggling for consistency since the beginning of this season. They lost more than the number of matches they have won and drew combined and are sitting at fourth from the bottom of the table.

Meanwhile, Maastricht have dropped into the sixth position after recording a streak of three winless games in the league. They are having an inconsistent form at the moment and will be hoping to bounce back with a win on Friday.

The past two overall wins were evenly split, with two each for both sides. Maastricht sealed a 3-1 win over Den Bosch in the reverse fixture.

At this venue, Den Bosch is on a three-game winning streak against Maastricht. Three of the past four meetings had goals in plenty.

Who will win the match between FC Den Bosch vs MVV Maastricht?

Den Bosch won four of the past six league fixtures at home. On the other side, Maastricht is on a three-game losing streak on the road.

Going on, Den Bosch have an upper hand in the recent history of this match-up here. Thus, we expect a win for them on Friday.

Over 75% of the matches played by FC Den Bosch were high-scoring affairs. They owns a defense which allow goals at a rate of two per game.

Neither Helmond Sport nor FC Den Bosch have been successful in keeping clean sheets of late. In that case, expect a both teams scoring scenario at De Vliert on Friday.

Maastricht’s current unimpressive form on the road is an advantage for Den Bosch despite of the positions of both teams in the standings. The recent h2h tradition also suggests a positive display for the home side here.

We therefore back FC Den Bosch to win at 2.30 odds as the main betting pick while placing the over 2.5 goals and both teams to score bet at 1.80 odds as the second tip.