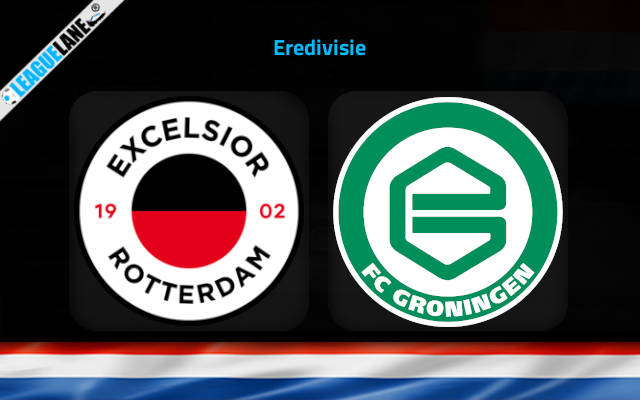 Excelsior vs Groningen Predictions and Free Tips from our expert tipsters when the teams go head-to-head in Eredivisie on Sunday, 08 January 2023.

Excelsior have been preparing well during December. They played in five friendly games and managed to win one match against Club Brugge. Now they will play their first league game since November.

Groningen have a similar story as well. They were busy last month and picked up two wins from their friendly games. Before the break, they played against Sittard in a 3-2 loss.

The visitors are unbeaten in the last four head-to-head matches. It has been over five years since Excelsior celebrated a victory against this team.

Both teams last met back in April 2019 and the visitors won that game by 1-0.

Who will win the match between Excelsior and Groningen?

The previous head-to-head records show that Groningen have won most of the matches in the last four years. At the same time, Excelsior are on a three-game losing streak. The visitors have a better chance to win all three points.

With just one exception, the last three head-to-head matches ended with more than 2.5 goals being scored. At Van Donge & De Roo Stadion as well a similar trend is observed.

You can back the following, as our first tip is that Groningen will win this game– the odd for this tip will be at 2.60 odd. The main reason for this tip is that they are unbeaten in two of their last four outings. Not to mention that the host have not won this fixture in the last five years.

Moving on, our second tip is that Over 2.5 goals will be scored – at 1.60. We can back this tip as both teams have scored six goals combined in the most recent meeting at Van Donge & De Roo Stadion.