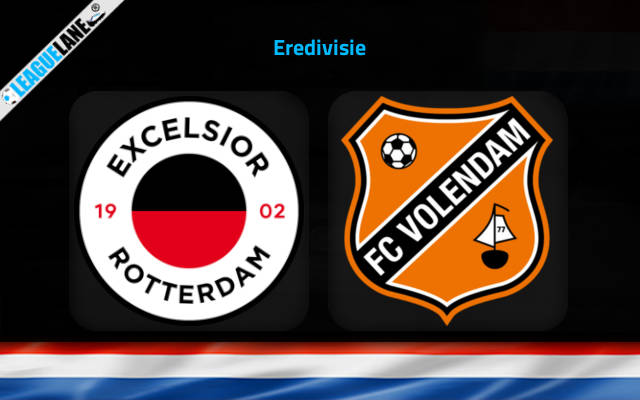 Excelsior vs FC Volendam Predictions and Free Tips from our expert tipsters when the teams go head-to-head in Dutch Eredivisie on Friday, 20 January 2023.

For all their issues with form, Excelsior have performed well at home this season. In fact, barring just three losses at this ground, they have a perfect winning record. And they will hope to add one more victory to the list this weekend.

Volendam are placed second to last in the table, and have a single win on the road all through the campaign. And this sole win came against the dead-last placed Cambuur too.

Excelsior have been the better team in the last two years. In fact, the latest clash ended in a 2-5 win for them on the road, and they scored two or more goals in three of the past four fixtures as well.

And coming to goals, every single h2h meeting at this ground after 1999 had goals from either side of the pitch.

Who will win the match between Excelsior and FC Volendam?

Excelsior have a winning record at this ground in league games after the World Cup break. In fact, they lost just thrice at this ground this league season, and all three losses came against teams placed in the top-eight of the table.

Meanwhile, Excelsior are on a four-fixture losing streak on the road, and also have a 100% winless record on the road this season – barring their win against the dead-last placed Cambuur. Moreover, they have a poor h2h record in the last two years too.

Surely, hosts Excelsior have the edge this Friday.

Both teams have been poor with defense. In fact, Excelsior have a single clean sheet in the last six fixtures, and conceded thrice or more in two of the past four games.

Meanwhile, Volendam have a single clean sheet to their name on the road since March of 2022. And on top of that, goals have always come in plenty in h2h clashes over the years.

As such, chances are high for the encounter to turn into a high-scoring affair.

As mentioned before, every single h2h meeting between the two teams at this venue had goals from either since, since 1999. And eight of the overall h2h clashes had three or more goals, as well as goals from both teams.

Consequentially, expect goals from both teams this Friday.

Excelsior have a 100% winning record at home this season, barring just three games. And these three fixtures were against teams currently in the top-eight of the table.

On the other hand, Volendam have a 100% winless record on the road, barring their game against the dead-last placed team. Moreover, they also have a worrying h2h record in the last two years, and even lost the latest h2h fixture 2-5.

As such, Excelsior to Win at an odd of 2.25 is a great pick for the weekend.

And coming to goals, either team has been defensively poor throughout the season. They let in goals in huge numbers, and this same trend can be seen in past h2h meetings too.

This is a great opportunity to use the combo of Over 2.5 Match Goals & Both Teams to Score at an odd of 1.83.