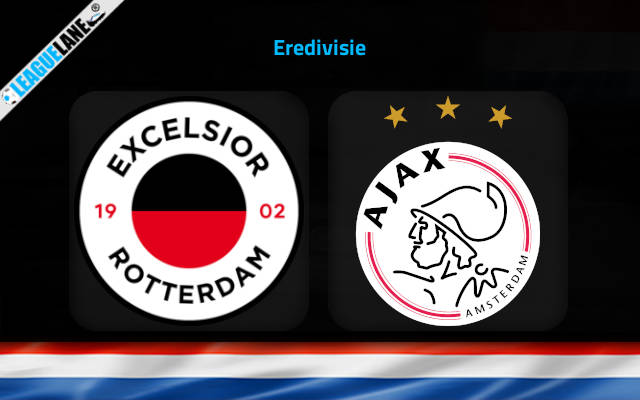 Excelsior vs Ajax Predictions and Free Tips from our expert tipsters when the teams go head-to-head in Eredivisie on Sunday, 29 January 2023.

Goalkeeper Stijn van Gassel had a great game last time as he stopped eight shots on target, however it was not enough as Excelsior lost to Utrecht by a narrow one-goal margin.

At the same time, Ajax have made a strong decision to relieve manager Alfred Schreuder from his position as head coach, the main reason is that the team were on a seven-game winless run. They struggled against a relegation team like Volendam in their last match.

Ajax are on a five-game winning streak against this opposition. Both teams last clashed back in October and Ajax celebrated a huge 7-1 victory that time. The last time the host won this fixture at this ground was over fifteen years ago.

Who will win the match between Excelsior and Ajax?

The visitors have not won an away fixture in the last two months. Moreover, the club management have a new challenge ahead of them regarding a new appointment, following Alfred Schreuder‘s departure. Usually, when a new manager is appointed it takes some time for the team to find its winning form. Considering all of this, we can expect this match to end in a draw.

Ajax have scored at least five goals in their last three consecutive matches against this team. This trend started in 2018 and is unlikely to occur this time, considering Ajax’s weak goal-scoring form since December.

Both teams have scored in the last five head-to-head encounters. Excelsior have scored in all of their home matches this month. It is likely that both teams will find the back of the net this time as well.

Ajax are facing a winless drought; this is one of the reasons why the club decided to change their manager. Their last five games matches have ended in a draw. At the same time, Excelsior have a turbulent form at home this month. Therefore, the first tip is that this game will end in a draw– the odd for this tip will be at 5.75 odd.

Our second tip is that Both teams to score– at 1.70. The main reason is that since 2017, both teams have scored consistently in this fixture.