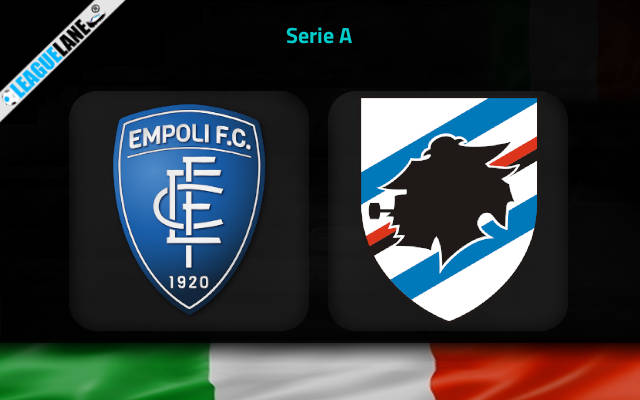 Empoli and Sampdoria will drop the curtain on Gameweek No 18 in Italian Serie A on Monday evening when they take on each other at Stadio Carlo Castellani.

Sampdoria could not have imagined a better result right on the return of Serie A football after the World Cup break as they managed a very important 1-2 victory away at Sassuolo.

It was only their second win of the season, the one that secured a glimmer of hope for the fans in Genova.

However, Le Samp could do little to harm the current leaders Napoli eight days ago when they fell 0-2 on the home patch.

Tomas Rincon’s first-half red card was not helpful at all, but it is worth mentioning that Napoli had already been in control earlier as well.

The team led by Dejan Stankovic (took charge in October) are still miles away from the safe zone. They have 9 points in 17 games and sit six points below Spezia in 17th position.

Sampdoria are now looking ahead of a winnable fixture. They take on Empoli who got super lucky to avoid a defeat against Lazio last weekend.

Paolo Zanetti’s men bagged two goals from their lone two shots on target eight days ago at Stadio Olimpico. They had earlier played a 1-1 draw at Udinese in another game in which they did not shine at all.

Empoli are 13th in the league ladder despite winning just 4 of 17 matches so far in the season. They are now up against a very motivated opposition and we see the value in backing Sampdoria’s win at the 3.50 odds.

Since we have seen plenty of goals in the recent H2H matches between these rivals, we are very much tempted by the 6.50 odds offered for Sampdoria to win & Over 2.5 goals FT bet here.