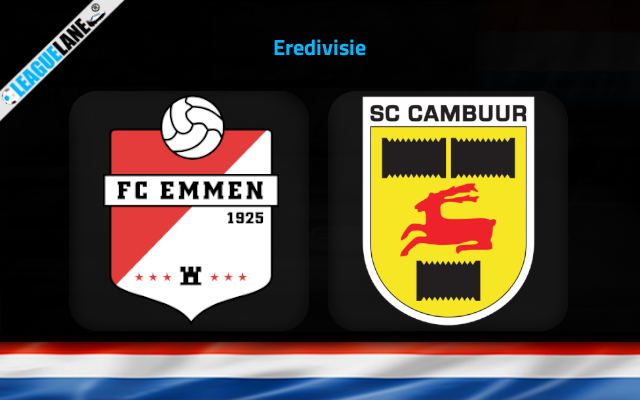 FC Emmen vs Cambuur Predictions and Free Tips from our expert tipsters when the teams go head-to-head in the Dutch Eredivisie on Sunday, 15 January 2023.

Neither FC Emmen nor Cambuur is having a decent form so far in this campaign. Both are sitting inside the danger zone of the table. Cambuur is comparatively worst as they are currently at the foot of the table.

FC Emmen have managed to record a set of unbeaten outcomes and were following a streak of it before dropping points to Twente in their previous outing. They will be hoping to return back to the winning ways on Sunday.

FC Emmen can rely on the recent tradition since they are unbeaten in the previous two encounters against Cambuur. Four of the last five meetings were one-sided affairs.

Their most recent clash was on 2018 in an Eerste Divisie fixture and the match ended in a 1-1 draw. The past four overall wins at this stadium was evenly split, with two each for both.

Who will win the match between FC Emmen vs Cambuur?

FC Emmen’s recent home form looks decent enough. They were unbeaten in five of the past six home league fixtures.

On the other side, Cambuur is on a five-game winless streak on the road. In that case, we expect a win for FC Emmen on Sunday.

Their h2h clashes are usually low-scoring affairs. Moreover, three of the last four home matches of FC Emmen goals under 2.5 ft. Therefore, we expect this match to have under 2.5 goals ft.

The defensive side of both these sides have leaked more than twice the number of goals their attacking side have scored.

But Cambuur’s attacking side is so weak and they doesn’t seem to have the potential to score one past this weak defensive side of FC Emmen. Thus, we don’t expect this match to have goals from both ends.

Cambuur is currently in a state that any teams could beat. FC Emmen, who sits a couple of spots above Cambuur, with the possession of better stats are likely to seal a win here.