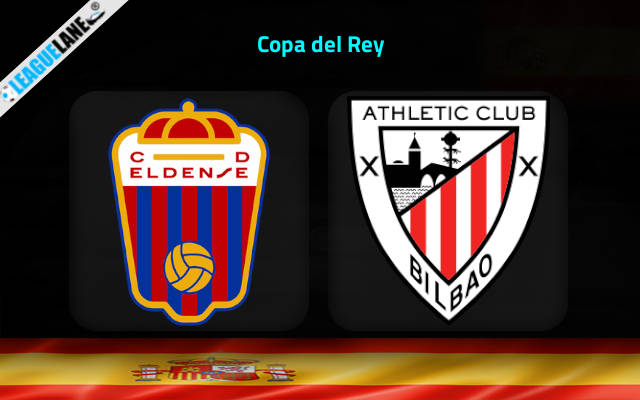 Eldense vs Athletic Bilbao Predictions and Free Tips from our expert tipsters when the teams go head-to-head in Copa del Rey on Thursday, 5 January 2023.

Eldense were part of the fourth tier of Spanish football the last year, and got promoted at the end of the season. They are currently having a good season in the third tier, but might be biting off more than what they can chew in this upcoming match-up.

Athletic Bilbao are legitimate contenders for one of the European spots from the Spanish top flight, and not for just this year. They are one of the hardest challenges even for the best of the lot like Barcelona, and Real Madrid.

Along with Real Madrid and Barcelona, Bilbao are the only team in the Spanish top flight to not have been ever relegated in their history. And as such this is the first time these two teams are locking horns with each other.

Who will win the match between Eldense and Athletic Bilbao?

Not only are Bilbao from the top flight, but they are in terrific form as well. They are unbeaten since November, and all through the current season they lost just four times. And it is to be noted that two of these defeats came against Barcelona, and Atletico Madrid.

Meanwhile, Eldense might be on a good run in the third tier, but they are massively inexperienced compared to their counterparts. It is also to be noted that Bilbao are the second-most successful team in the Copa del Rey.

Bilbao for sure are going after a deep run in the tournament, and chances are high they will try to score in plenty – leaving no stone unturned.

It is quite unlikely for this to happen. Bilbao are a defensively sound team, and their manager Ernesto Valverde likes to gives utmost importance to discipline in the backline.

Athletic are the most successful team in the history of the Copa after Barcelona, having won it 23 times. They are in great form, and will be determined to make light work of their opponents. A -1.5 Asian Handicap on them at 2.00 odd seems a great pick.

Coming to the next tip, Over 2.5 Match Goals at 1.75 odd appears to be a solid choice. We have an in-form title contender against a minnow.