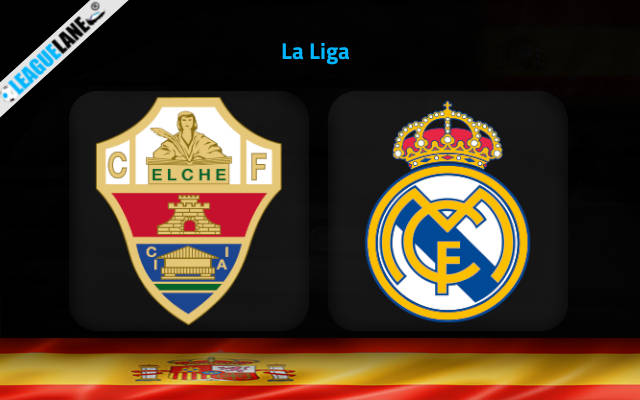 Top of the table meets the very bottom on Wednesday evening in La Liga as Real Madrid travel to Estadio Manuel Martinez Valero to battle the rock-bottomed Elche in the 10th round of the competition.

Los Blancos will enter the tie in the highest of spirits having claimed a huge 3-1 win over Barcelona in El Clasico.

It was a brilliant overall performance from the whole team, especially Karim Benzema and Federico Valverde who proved out to be the genuine difference-makers in the first half on Sunday.

Carlo Ancelotti’s men are now alone at the top of the ladder with eight wins and one draw in nine league games since the beginning of the season.

They will have a great opportunity to maintain the extraordinary spell of form on Wednesday evening against Elche who are not pulling up any trees this season.

Elche made a managerial change at the start of the month but it was not before October 12th when they finally got a new manager.

His name is Jorge Almiron and he has started with a positive result, following a 2-2 stalemate away at Valencia on Saturday.

Elche are, however, still the only team in the league without a win after nine rounds. It is very hard to believe they will get the first one just against the defending champions and the current leaders.

Real Madrid are flying high after the win in El Clasico and we can hardly see any other scenario but an easy win for them here. We will take the visitors to win by at least two goals difference at the 1.95 odds.

The value is with Fede Valverde to score anytime for the visitors at the sky-high 4.50 odds following his marvelous goal against Barcelona on Sunday.