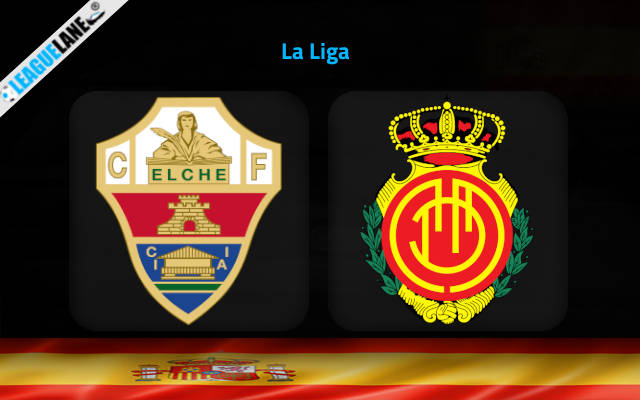 Elche are currently the worst team in the Spanish top flight, and they certainly are placed bottom-most in the table. The rather struggling Mallorca will identify this fixture as a great opportunity to deliver a much-needed win this Monday at the Estadio Manuel Martinez Valero.

Elche are placed 20th in a table of 20, and they are the only team remaining in the competition to deliver their first win. They conceded the most number of goals of all the teams in the competition, and only one other team scored fewer goals than them.

They are also the only squad in the La Liga to have lost their last five matches in a row, and they have a 100% losing record at home, barring a single draw.

Meanwhile, Mallorca did lose two of their past five games in the league – but the two losses came against none other than Barcelona and Real Madrid.

It also needs to be mentioned that they have a 100% unbeaten record away from home, disregarding their match-up against defending champions Real Madrid.

By the looks of things, expect a victory for Mallorca this Monday on the road.

Elche are on a five-game losing streak, and they lost five of their previous eight matches too. Note that they were able to register just a single win from their past ten games. Do also note that they let in 13 goals from their former four fixtures.

Going on, the last they won at home was back in May, and all through 2022 they recorded just five wins in front of their home crowd.

On the other hand, Mallorca lost thrice so far in the current edition of the La Liga – but the three defeats came against teams who are currently placed in the top-four of the table.

They also lost just once away from home in the Liga, and all along they found the back of the net consistently.

Taking into account these observations, expect a win for Mallorca this Monday against the struggling Elche.

Tips for Elche vs Mallorca