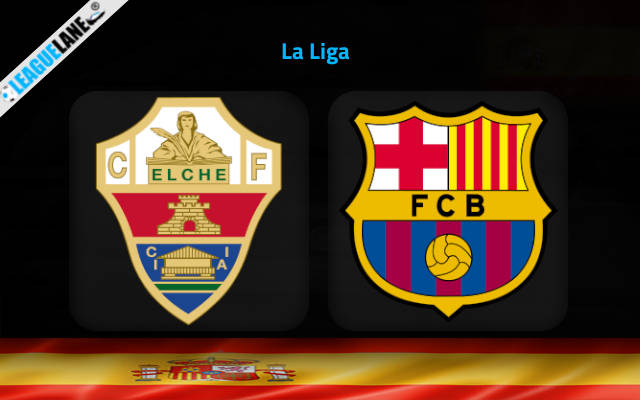 Despite the odd losses, Elche have largely been in fine form in 2022. The club having not finished in the top ten positions in the top flight since 1969, would fancy their chances of doing so if the team manages to keep delivering such performances.

However, in their most recent league fixture, they suffered a demoralising 3-0 loss against relegation bound 20th place team Levante on the road. Furthermore, Gumbau was sent off in the contest in the 73rd minute.

This marked the club’s second loss in five La Liga fixtures. Having gained seven points from their last five league matches, the club is now 13th in the league, eight points clear of relegation.

Barcelona have had a new breath of life since the arrival of Xavi. Things in particular since the winter transfer window have been amazing for the club, as they are looking certain to compete in the UCL next season.

In their most recent fixture, the club destroyed Athletic Club by a score line of 4-0 at home. This marked the club’s 4th win in five league matches and took their unbeaten run of games in the La Liga to ten games.

With thirteen points from their last five league fixtures, the club is now 4th in the league table, a point behind the 3rd place team.

Blaugrana are in fine form and have not lost in their previous nine league matches on the road. However, one needs to consider their opponents are on a five match unbeaten run as well in home fixtures, winning all but one of those games.

With that being said, I do not see either team dominating proceedings this Sunday and a closely competed game is expected.

Pierre-Emerick Aubameyang has scored four goals in his last two league matches away from home. The Gabon international has proved to be a wonderful addition to the Barcelona squad and is already the team’s third highest goal scorer this season in the league despite making just four league appearances, with two of those off the bench. I am backing him to get on the score sheet, this Sunday.