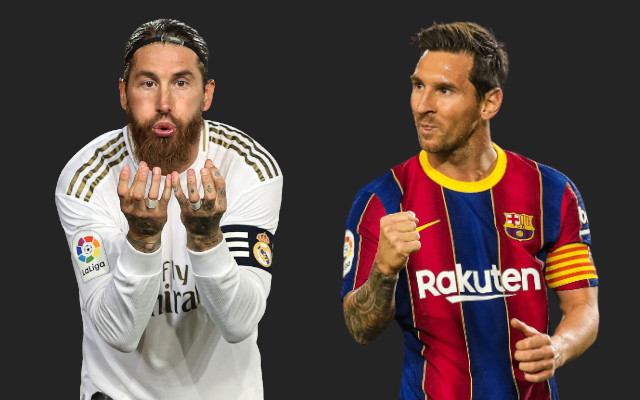 Barcelona welcome Real Madrid on Saturday, for the first El Clasico of the 2020/21 season. We take a look at some key stats and rare trends, informative for football fans and punters alike.

This will be the 10th El Clasico for Zidane as the Real Madrid boss and this far he steered his team to 4 wins and 3 draws, while losing twice.

The pick of the stat is his unbeaten record at the Camp Nou in as many as 5 visits, a record that stand at 3 wins and 2 draws.

At the same time, Zidane’s record as a player against Barcelona is even better. He took the field in 11 derbies and helped his team win 4 times alongside 4 draws with 3 games ending in defeats. The Frenchman scored three goals during the period.

Ronald Koeman wore Barcelona shirt for 6 seasons between 1989 and 1995 bagged 90 goals across all competitions and remain as the highest goal-scoring defender of all time at the club.

He was also the highest scorer for the Blaugrana from free-kicks and penalties, both records surpassed by Lionel Messi.

He remains second at second in the table of highest number of goals scored by a defender in Spanish La Liga, the top spot taken over by Sergio Ramos last season.

Never the less, it will take some beating to surpass Ronald Koeman’s record of 25 consecutive penalty goals in La Liga.

Karim Benzema on a barren streak

Benzema lit up the Spanish La Liga campaign last season with 21 goals after hitting the exact same number in the previous season.

Against Barcelona, Benzema have a poor scoring record even when he was on prime of his form. Also, it appears that he rarely makes an impact as nominal 9 goals and 8 assists came from 37 appearance.

Also, he is without a goal in 8 consecutive La Liga matches against Barcelona. Overall, he net just once at Camp Nou.

He is going through a drought at the moment and managed to find the back of the net just once in 5 appearances this season.

Ramos to get booked ?

Sergio Ramos played more games against Barcelona than any other team in his career and he will reach half a century by the end of the season if the teams will meet in a double legged competition like Copa del Rey of Champions League this season.

Including one game with Sevilla, Ramos lined-up against Blaugrana 46 times across all competitions so far and bagged 4 goals. His second highest appearance came against Atletico Madrid that stand at 44 at this moment.

But what stands out in his records is the number of times he received a yellow or red card. Ramos has been sent-off 5 times in Clasicos and cautioned 15 times.

We bet, he is everyone’s favourite to receive a booking on Saturday’s clash.

Lionel Messi is due a goal

Just like his opposite number Sergio Ramos, Messi has made most number of his career appearances against Real Madrid. The number stands at 43 across all competitions, out of which 27 are in the La Liga.

There has been 26 goals scored during the period, while providing 14 assists and this is without a doubt an incredible record against one of the Europe’s elite club.

Anyway, the little magician haven’t scored a Clasico goal since the 2-2 draw at Camp Nou at the end of 2017/18 season. Messi fired blanks in 5 consecutive appearances against Real Madrid since.

He is due a goal for sure, not just because the opponent is Real Madrid. The only competitive goal he scored for Barcelona came from penalty spot on matchday 1 against Villarreal.

The teams are perfectly poised on paper and both teams are yet settle into a rhythm this season. Even so, the bookies are pricing Barcelona are favourites in the region of 2.10 odd, while draw can be backed at 3.60 and Madrid win at 3.20.

Now, the betting odds on home win is dropping as we speak, indicating a trend of high number of bets being placed on the Barcelona win. Meantime the price for both draw and away win are on the rise.

The Stat that stands out

With rich history on their sides, there are plenty of statistics available for betting enthusiasts for this particular match.

But the one that stands out is the goal scoring pattern at this venue. We saw a goal-less draw here last season, but the previous 15 h2h duels at t Camp Nou saw both teams scoring.

The odd for BTTS is priced in the region of 1.60 and it continues to drop as we speak, indicating this is a bet most punters favour for the first El Clasico of the 2020/21 season.