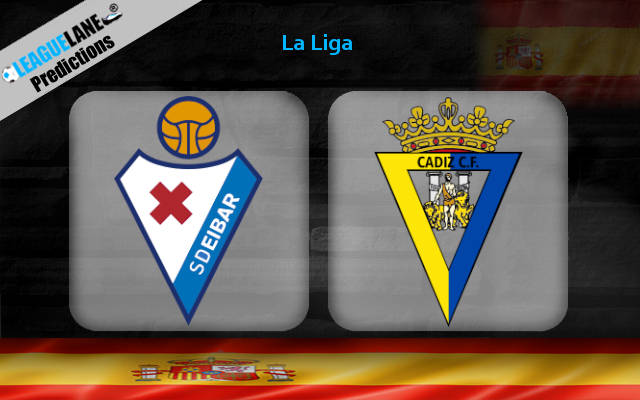 After finishing the last month La Liga with a double loss in the schedule, October has awarded Eibar with a three-game unbeaten run in the league.

Their recent climb in the league table has been paused at the 11th spot with 8 points from their 7 appearances in the campaign. Los Armeros will host on the back of a 0-1 win on the road against Sevilla last time out in the schedule.

Cadiz has had a decent start to their return to La Liga this term. They have picked up 11 points from their 7 league clashes so far and are backed by their four-game unbeaten run.

Their winning margins have been low as they have scored and conceded six goals each until now. They will visit on the back of a goalless draw at home with Villarreal in the previous encounter in the campaign.

Eibar will be eager to carry on their unbeaten streak for the fourth game in the campaign. Both their recent two winning margins have been with a one-goal difference. This suggests that the home team will rely on their defense in the game if they need to take something out of the encounter.

The promoted team made it big with their arrival to the top tier after the win against Real Madrid. The guest will look to build on their unbeaten streak in the campaign. Even though they are slightly better at home than on the road, the Yellow Submarine has won the last three La Liga outings with a clean sheet.

On the other hand, Eibar has been winless for the past four home matches in their schedule. They have scored only one goal in the same period. Besides, they will host the visitors after a long gap of 12 years in their h2h history.

Regarding their ground advantage, Los Armeros doesn’t pose an enormous threat for the traveling side. Cadiz will come in hot with their high morale from making it out of some tough games in the league. So, the double chance favoring Cadiz will probably be the best bet for the punters. Also, expect a low-scoring affair at Eibar on Friday night.