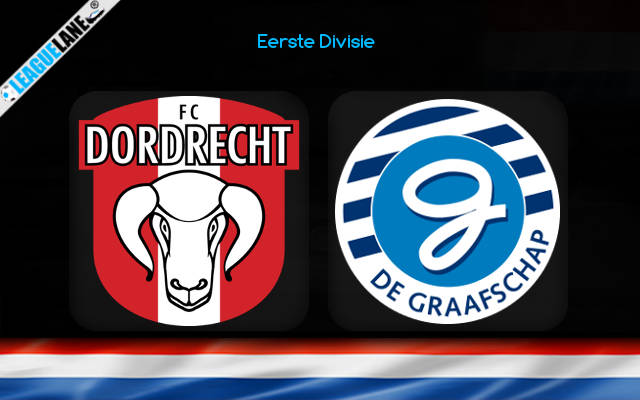 The gulf in quality between these two teams has been quite significant in the last several seasons and the current campaign is by no means different. De Graafcshap can ill afford another slip-up having claimed just one point in the last two league games. We expect an easy win in a one-sided affair for the visitors here.

De Graafschap will have a nice opportunity to return to winning ways on Friday night when they travel to Riwal Hoogwerkers Stadion to battle the rock-bottomed Dordrecht on Gameweek No 16 in the Eerste Divisie.

De Graafschap dropped out of the top-two positions in the league standings after claiming only one point from the last two rounds.

They fell 2-1 at Den Bosch before playing a disappointing 1-1 draw at home to bottom-half Telstar last weekend.

To be fair, Reinier Robbemond’s troops did ship a late equalizer four minutes from time on the occasion.

However, nobody can deny a small crisis for one of the main contenders for the promotion in this term of the Eerste Divisie.

The clash against the last-placed Dordrecht should really provide the visitors a nice opportunity to get their league campaign up and running with a comprehensive victory.

The hosts have suffered a demolishing 5-1 defeat at Eindhoven last weekend, conceding as many as four goals in the first half of the affair.

It was the third disastrous defeat in the last four games across competitions for Michele Santoni and his men.