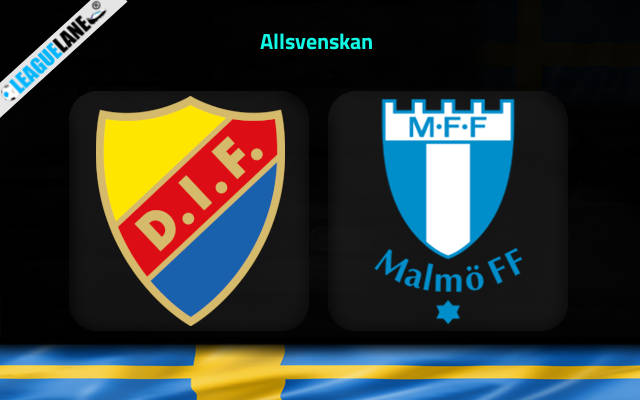 After drawing the last 2 games in row, Djurgarden will host the previously lost Malmo hoping to snatch a win. These two sides will lock horns at Tele2 Arena this Monday.

Malmo is at the 3rd spot on the standing with 15 points from 8 games. They won 4 times in the league while drew thrice and lost on one other occasion. The visitors need only 4 more points to reach the table top and they have been a defensive unit so far. They scored 8 while conceding just 3 showcasing their tight backline.

The visitors will be wanting a better result here following the 2-0 league loss in their previous game against AIK. This loss ended their unbeaten run in the league. For 5 of the prior 6 games involving them, a notably low volume of goals have been scored between them and their opponents.

On the other side, Djurgarden resides at the 6th position on the table with 12 points. Of the 8 matches played, they won and drew 3 times each while losing on twice other occasions. Their total goals to conceding ratio stands at 12:7which shows that they need some slight adjustments in defense.

Djurgarden head into this fixture following on from a goal-less Allsvenskan drawn result against Elfsborg. In their last 6 games, Kim Bergstrand’s Djurgarden have netted a total of 9 times which gives them an average number of goals scored per match of 1.5.

Meanwhile, Malmo lost their first loss in Allsvenskan and that to was on an away game previously. They remain winless against Djurgarden in away games for the last 4 matches in the league.

Since the hosts are strong at home and the visitors have lost only once on-road, we feel that this fixture could end up in a Djurgarden win or draw.