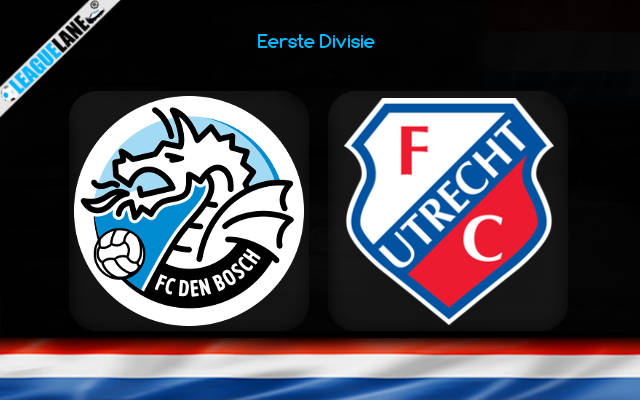 FC Den Bosch vs Jong FC Utrecht Predictions and Free Tips from our expert tipsters when the teams go head-to-head in Eerste Divisie on Friday, 06 January 2023.

Jong Utrecht shocked everyone when they defeated Jong Ajax by 2-1 last month. They have picked up good form as they have won two of their last three matches. Now they will aim to win maximum points from their January fixtures.

Den Bosch suffered a narrow 1-0 defeat against Helmond Sport last time. They have important games coming up in January as they will play against Ajax in the KNVB Cup.

The host are on a three-game winning streak against this team. The visitors are yet to win a game at this ground since 2016.

Both teams last met back in October and Den Bosch won that game by 1-0.

Who will win the match between Den Bosch vs Jong Utrecht?

The visitors will most likely take all three points from this game. Despite having a good record, the current host are not the same team anymore. They have lost more than 60% of their matches this season.

At the same time, the visitors won two of their last three outings by a good margin.

The past records shows that four of the last five encounters ended with over 2.5 goals being scored. A similar trend is also observed at De Vliert.

Barring the one fixture back in 2021, both teams have scored consistently in this fixture. We can expect the same pattern to follow up this time as well.

The visitors defeated two top teams namely MVV and Jong Ajax recently. At the same time, the host are on a three-game losing streak. We can back Jong Utrecht to win this game– the odd for this tip will be at 3.50 odd.

Our second tip is that Over 2.5 goals will be scored – at 1.66. At De Vliert, the last four consecutive matches ended with at least three goals being scored in total.