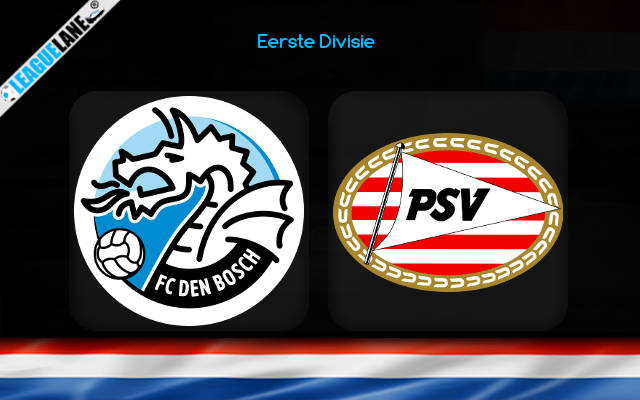 FC Den Bosch vs Jong PSV Predictions and Free Tips from our expert tipsters when the teams go head-to-head in Eerste Divisie on Friday, 20 January 2023.

The situation is tense at Den Bosch as they have the worst form in the league. They are on a six-game losing streak. Previously they lost to Eindhoven by 4-1. Manager Jack de Gier’s career will be at risk if he does not fix this situation.

Meanwhile, Jong PSV’s three-game unbeaten run finally ended as they lost to NAC. Another interesting point to note is that they are the only team in the league to have a goal difference of nil at this phase of the season.

Jong PSV won the September fixture by 3-1. They have won three of the last five overall head-to-head matches.

At this ground, the host have played well against this opposition as they have won four of the last five matches.

Who will win the match between FC Den Bosch and Jong PSV?

The host are going through a downfall. It has been over two months since the last time they won a league game. In the KNVB Beker they have performed poorly. Therefore, we can expect the visitors to win this fixture.

It is worth knowing that in the last two encounters, the game ended with more than two goals being scored. We can expect the same trend to occur this time as well.

It is likely that both teams will score. This is after considering that since 2022, both teams have scored plenty of goals both in the March as well as September fixtures.

The first tip is that Jong PSV will win this game– at 2.37 odd. They won the September fixture by a huge margin. Another important point to note is that the host are on a six-game losing streak.

Mobing on, our second tip for this game is that Over 2.5 goals will be scored – the odd for this tip will be at 1.66. A minimum of three goals have been scored in the last two consecutive meetings.