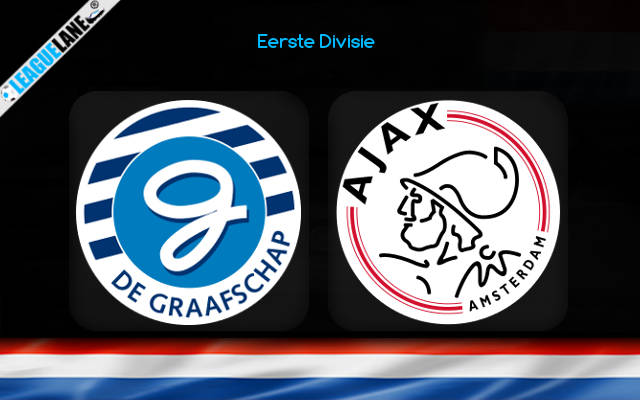 De Graafschap vs Jong Ajax Predictions and Free Tips from our expert tipsters when the teams go head-to-head in Eerste Divisie on Friday, 13 January 2023.

De Graafschap held MVV in a 2-2 draw recently. Jeffry Fortes scored the equaliser in the 90th minute of that game. They will focus on winning the maximum number of games from their January fixtures, as they are on a three-game winless run.

Meanwhile, Jong Ajax are going through a difficult period. Four of their last five matches have ended in a stalemate. They now have an opportunity to end this form as they have performed well against this team in the past.

Three of the last five matches have ended in a stalemate. The last time the host won this fixture was nearly three years ago.

At this ground, the visitors are unbeaten in three of the last four head-to-head matches. Both teams last clashed back in August and the visitors won that game by a huge 5-1 margin.

Who will win the match between De Graafschap and Jong Ajax?

The past records clearly show Jong Ajax have dominated this fixture. However, now they are facing difficulty in winning games. The last time they celebrated a league victory was way back in November. At the same time the host have not won a home fixture since early December.

This fixture is a high-scoring one in recent times. At De Vijverberg, the last five meetings between these two teams ended with more than three goals being scored.

Both teams have scored in this fixture at De Vijverberg since 2017.

Our second tip is that Over 3.5 goals will be scored – at 2.25. A minimum of four goals have been scored combined in the last five encounters at De Vijverberg.