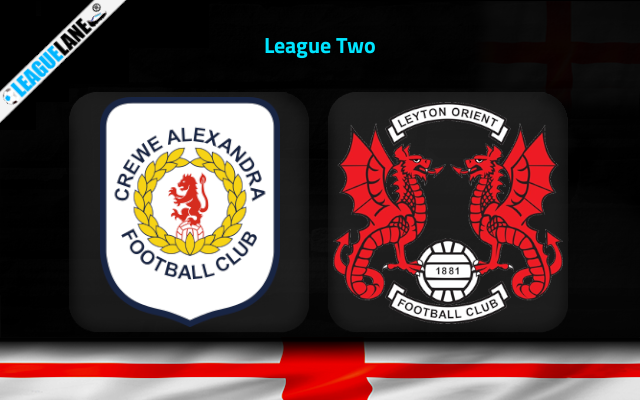 Crewe vs Leyton Orient Predictions and Free Tips from our expert tipsters when the teams go head-to-head in the England League Two on Saturday, 10 December 2022.

Crewe have lost two of the past four league outings and have dropped to the 15th position in the league table. They will head into this match after suffering a 1-2 defeat against Newport last time out.

Their Saturday’s fixture will be more challenging as they face an in-form Leyton Orient. They have only lost twice so far this campaign and are in possession of top spot in the league standings.

Crewe can rely on the recent tradition since they have won the previous five encounters against Leyton Orient. The latest encounter had finished in a 1-0 win for Crewe.

The visitors are having a winless form at this stadium for over 8 years. On top of that, they are on a three-fixture losing streak against the home side Crewe at the moment.

Who will win the match between Crewe vs Leyton Orient?

We are expecting a victory for Leyton Orient despite of the head to head superiority of Crewe. The main reason is the current form of both these teams.

Crewe finished second in the previous season while Leyton finished 17th. Unlike the past season, Leyton is having an exceptional run so far in this season. Meanwhile, Crewe is finding it hard to gain the much needed momentum this time around.

More than 50% of the matches played by Crewe and Leyton Orient have seen under 2.5 goals full-time.

Crewe owns and average offensive side and it will be a tough ask for them to score against this Leyton side, who owns the best defensive line of this campaign.

Leyton Orient has kept a clean sheet in the past two away matches. On the other hand, Crewe scored just 7 goals in the last 10 matches.

Therefore, both teams to score option is unlikely to land in this fixture between Crewe and Leyton Orient.

Taking into account these observations, we like to back Leyton Orient to win at 2.00 odds. For the second tip, we like to place the Under 2.5 goals bet at 1.62 odds considering the goal trend of both these sides.