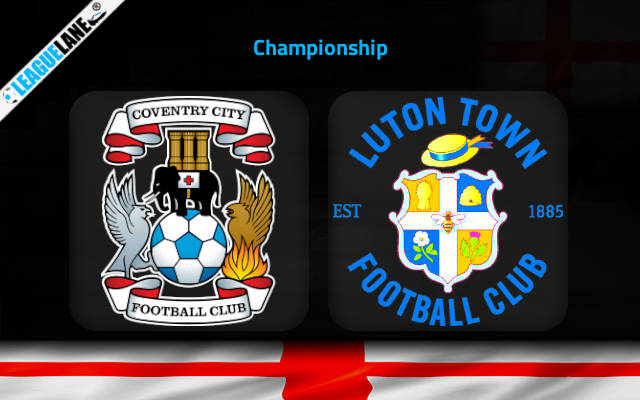 Coventry City will be looking to keep up the momentum against Luton Town, having lost just once from the last 5 games. The side is currently unbeaten in the last 3 fixtures and are only 3 points deficit from Play offs spot. Luton won the last 3 games in a row, thereby sealing the last spot for Championship Play offs. This upcoming 26th Round of EFL Championship is scheduled at Coventry Building Society Arena where the Hatters will be visiting this Tuesday.

The Sky Blues are at the 10th spot on the standing with 51 points from 33 games. They won 14 times in the league while drawing on 9 and losing on 10 other occasions. They scored 43 in total while conceding a sum of 38 thus far.

Coventry had a 1-1 Championship drawn result against Preston North End, last week. They have seen their defense breached in 5 of their previous 6 games, giving up 7 goals in the process.

On the other hand, The Hatters reside at the 6th position on the table with 54 points. Of the 33 matches played, they won 15 games while drawing and losing 9 matches each.

Luton registered their third win in a row against Derby, the previous week. Things have not been going that well in front of goal for them recently, with the side failing to score in 2 of the last 6 games.

Previous matches between the two has averaged 2.71 goals while BTTS has happened 43% of the time. We envisage a home win as the hosts are unbeaten in the last 4 games played at home and are on remarkable form as of now. Moreover, the visitors are highly inconsistent at the games played on road this season.