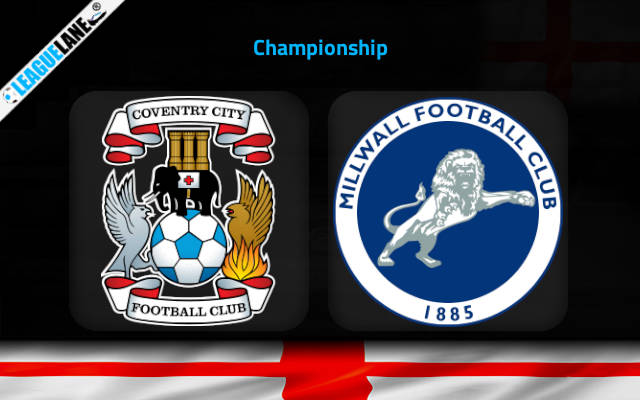 Both the teams are towards the middle of the table with Millwall sitting just a spot away from Coventry and with 4 points in the difference. After a previous league loss, the visitors hope to win the upcoming fixture which is being scheduled away. The hosts who have not yet seen a victory in the past 5 league fixtures, thinks of a home win this Wednesday at Coventry Building Society Arena.

Coventry is at the 10th spot on the standing with 34 points from 22 games. They won 9 times in the league while drawing on 7 and losing on 6 other occasions. They have scored 29 in total while conceding a sum of 26 so far in the league.

Mark Robins’s men have netted and conceded the same amount of 7 over their last 6 outings. The side also failed to score in 2 of the last 5 games. Their latest league fixture ended in a 1-1 tie to Huddersfield.

Millwall is at the 12th position on the table with 30 points. Of the 22 games played, they won on 7 games while drawing on 9 and losing on 6 other occasions. Their total goals to conceding ratio is the same at 24:24.

The Dens have scored in each one of their last 6 league matches while scoring and conceding the same amount of 8 from those occasions. After a home win against Birmingham, they lost to Peterborough in the latest league fixture by 1-2.

Both Millwall and Coventry aren’t going into this upcoming fixture on the back of strong runs.The uncertainty in the Christmas window with postponements may have slowed their sloppy form even further. Therefore, we anticipate a possible draw happening at Coventry Building Society Arena this Wednesday.