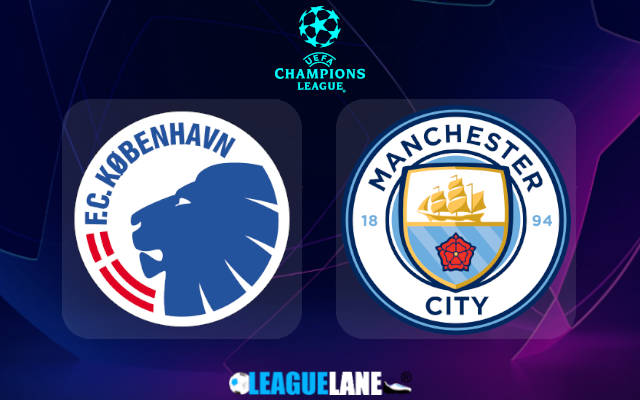 Red hot Manchester City aim another win when they travel to Copenhagen for the matchday 5 fixture of the 2022/23 Champions League.

It was carnage in the reverse fixture at the Etihad last week and as expected Manchester City run riot with a 5-0 win. They made it to four straight wins in this season’s Champions League another three points here will confirm their ticket to the knockout stage.

Copenhagen on the other hand is in all sorts of trouble after managing just a point via a goal-less draw against Sevilla. They are at the foot of the table though level on points with the Spanish club.

This fixture could not have at a bad time for the Danish club as they are struggling with injuries and domestic form is not good either with the team struggling in the middle of the table.

This is the only second time these two are meeting in a UEFA competition.

The previous was during the 2008/09 Europa League knockout stage and City progressed to the next round with a 4-3 aggregate win. It was a late double from Craig Bellamy that set up a 2-1 win at the Etihad after a 2-2 draw in Copenhagen.

Now, Manchester City are unbeaten in the three overall meeting with the Danish club with 2 wins and 1 draw.

Manchester City are unstoppable at this moment and we can back them to take a big lead from the first half itself. This is why we will take the first half Asian handicap -1 for decent 1.90 odd.

After the 4-0 thrashing of Southampton on weekend, the Citizens have seen 4 or more goals in 8 of the last 11 matches across all competitions. The Over 3.5 goals at full-time is priced at 2.00 odd for this match and this is a decent alternate for those who love bets from the goal market.

We will take Erling Haaland to score 2 or more once again with the Norwegian sensation scoring in 10 straight competitive games for the club.