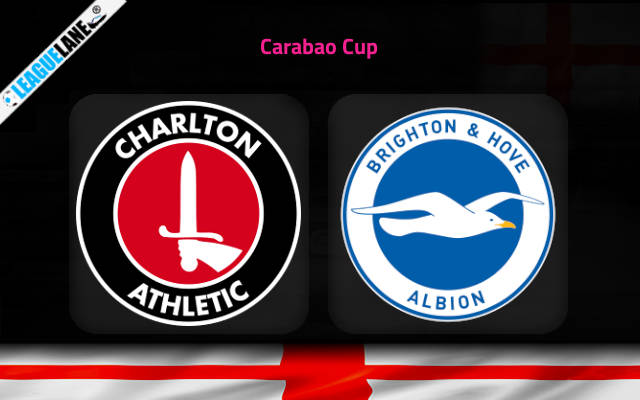 Charlton continued their dreadful spell of form on Saturday afternoon when they fell 1-2 at home to Bristol Rovers.

It was the seventh successive match without a win and the fourth loss in the previous five games in all competitions for them.

The Addicks dropped to the 18th position in the League One standings as a consequence. The relegation zone is only four points away at the moment.

Charlton have won only 5 of the opening 21 games in the third division football this season. They have also recently suffered an embarrassing 3-1 defeat at the hands of Stockport County in the FA Cup.

The only bright side of the season for the Addicks is this League Cup run but it is worth noting they had luck to set up this R16 clash against Brighton.

Charlton eliminated Queens Park Rangers and Stevenage on penalties in two of three matches in this competition, edging past Walsall 0-1 in the remaining.

Brighton are a strong Premier League squad and they will go into this as massive favorites. After all, the Seagulls have eliminated the likes of Arsenal in the previous round of the Carabao Cup in mid-November.

Roberto De Zerbi’s men played just one mid-season friendly during the international break as they drew 2-2 against fellow Premier League side Aston Villa 13 days ago.

This is a perfect opportunity for Brighton to boost up the confidence ahead of the Premier League clash against Southampton on Boxing Day. The Seagulls are sky-high 7th in the Premier League standings and they have bagged 23 goals in the opening 14 games of the season.

We will back Brighton to have the lead at the half time and win the match at the end at the odds of 1.90, while the braver punters can try with the Seagulls to win 0-3 at the 8.50 odds.