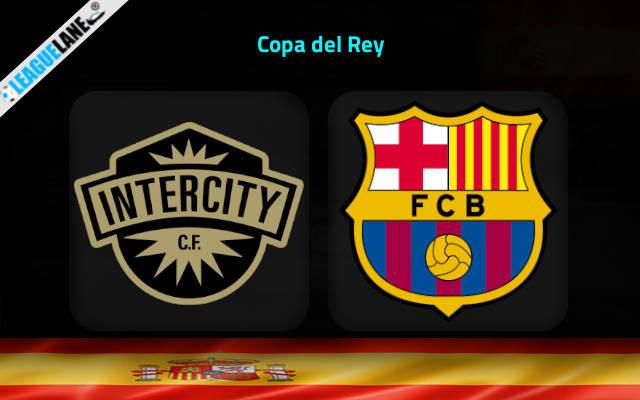 CF Intercity vs Barcelona Predictions and Free Tips from our expert tipsters when the teams go head-to-head in the Spanish Copa Del Rey on Wednesday, 04 January 2022.

Intercity have advanced it to the pre-quarters by sealing a clean sheet victories over the likes of Mirandes and Cirbonero in the previous rounds. They will have some spirits to enter the next clash at Camp Municipal Antonio Solano.

However, they will have a very hard test on Wednesday as they faces Barcelona as their rivals. Barcelona is still at the top of the Laliga table and follows an exceptional form.

This will be marked as the first head to head meeting between these two teams.

Who will win the match between CF Intercity vs Barcelona?

Barcelona seem to have another win on their way. They are on a five -fixture unbeaten streak and are on a separate three-game winning streak on the road.

Meanwhile, Intercity have failed to seal a victory in three of the last five home outings. Most of those fixtures were from the Primera Federation. In that case, expect an easy win for Barcelona.

Affairs involving Barcelona have generally been high-scoring affairs lately. Their attacking side is so strong and we can bet on them for delivering an over 2.5 goals ft match here.

On top of that three of the last four away outings including a couple of Champions League fixtures of Barcelona saw the landing of over 2.5 goals. Thus, expect this match to have over 2.5 goals ft.

Intercity have scored in the last two rounds but things won’t be same here as they faces an in-form Barcelona. They owns the best defensive side of the whole Laliga competition in this season. Therefore, we don’t expect a both teams scoring scenario here.

Barcelona have the potential of sealing a 0-3 win here. At 6.00 odds, we back that score-line as the main betting option here.

However, over 2.5 goals ft should be picked as an alternative despite of the low pricing by bookies.