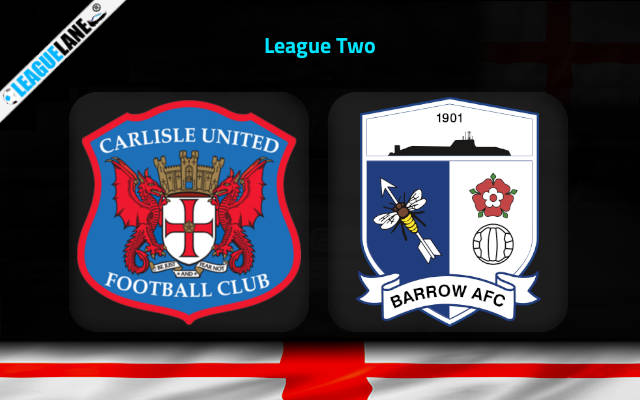 Carlisle has been treading the waters in League Two for over 7 years now but with their disastrous run in the league this season it looks like the team will be forced to play non-league football next season following their 16 years long continuous stay in the EFL.

They would be hoping to add points to their name when they welcome Barrow to Brunton Park this Saturday. Read our Preview, Predictions, and Betting Tips with Analysis here.

The teams met twice in the preceding season. The fixture at this venue ended 1-0 in favour of the hosts while the other match concluded in a 2-2 draw.

Carlisle vs Barrow Prediction and Analysis

The Cumbrians on the other hand have struggled throughout the season. They have registered a couple of victories in the season and are stuck in the relegation zone only on goal difference however it is their inability to turn draws into wins that is concerning their fans.

Carlisle in no way gave performances that would earn them a top half position in the league this season and are currently 23rd in the league. However, they have managed to get away with a point more often than not.

The visitors, despite sitting higher than their opponents in the table, will go into the match with the worse run of form. Given their shambolic run of games on the road and the hosts’ resilience we are backing Barrow to end up second best in the fixture.

Barrow has managed to find the back of the net quite often in the campaign and has conceded the same number of goals. This along with the hosts’ poor defensive display makes this fixture a great candidate for over 2.5 goals.

Tips for Carlisle vs Barrow