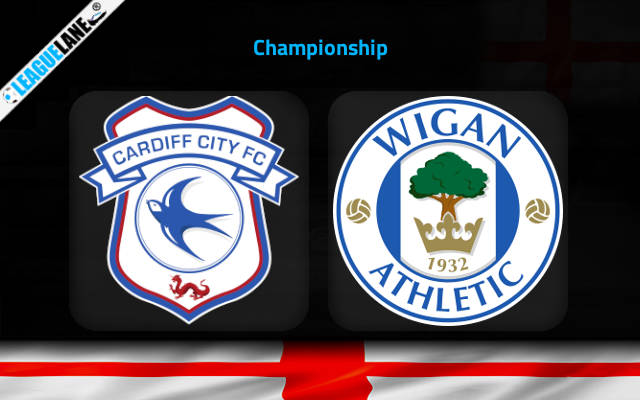 Cardiff vs Wigan Predictions and Free Tips from our expert tipsters when the teams go head-to-head in the England Championship on Saturday, 14 January 2023.

Wigan are easily the absolute worst team in the whole of the Championship. They are placed bottom-most in the table, and are the only team to have lost the last four straight league games.

Meanwhile, Cardiff are trying their absolute best to stay over the relegation cut-off. They have had their fair share of troubles all through the season, but for sure they are better than their counterparts for the day. In fact, they lost just once since the second week of November in any competition, and this sole loss came against the third-placed Blackburn.

These two teams locked horns just two months before, and then Cardiff recorded a comprehensive 1-3 win on the road. They also scored two or more goals in the last three straight h2h meetings.

Moreover, they are on an unbeaten run against Wigan since 2019.

Who will win the match between Cardiff and Wigan?

Cardiff lost just once in over the past two months, and this only defeat came against one of the toppers. They are also at home, where they have been unbeaten after the World Cup break.

On the other hand, Wigan are placed dead last in the table, and they have a single win to their name in the last 14 matches. In the process they even went through a four-game losing streak, as well as a five-fixture losing stretch.

In addition, they are winless in h2h clashes since 2019. By the looks of things, hosts Cardiff are expected to win this upcoming encounter.

It goes without saying that Wigan have the worst defense in the entire league. In fact, they let in 46 goals so far, and are the only team in the Championship to have let in more than 40.

It looks like we are in line to see a high-scoring affair.

Cardiff have been trying desperately to post some points on the board. They finally have been allotted an easier match-up, and we can count on them to give a spirited performance. It is a doubt if the struggling Wigan will be able to find the back of the net, that too on the road.

Wigan are the prime contender to get relegated at the end of the campaign, and are placed 24th in a table of 24. They are on a long stretch of poor performances, and they also are winless in h2h clashes in the past four years.

Meanwhile, Cardiff have massively improved their performances lately. They lost just once in the past two months, and are unbeaten at home after the World Cup. Likely, Cardiff to Win at an odd of 2.00 is a logical pick.

On that same note, the struggling backline of Wigan are expected to be tested a lot. It is inferred that the hosts will find the back of the net at least twice. Moreover, recent h2h clashes have all been goal-fests.