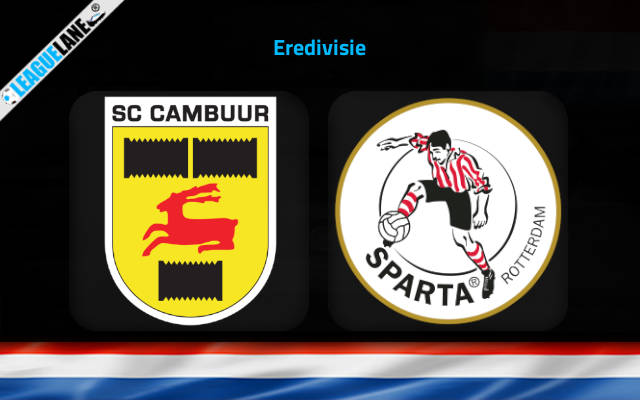 Cambuur vs Sparta Rotterdam Predictions and Free Tips from our expert tipsters when the teams go head-to-head in Dutch Eredivisie on Saturday, 21 January 2023.

Cambuur are easily the worst team in the Dutch top flight at the moment, and are placed bottom-most in the table. They are by far the prime contender to get relegated at the end of the campaign.

Meanwhile, Sparta are one of the best as well as one of the most consistent teams in the competition. They are placed sixth in the table as of now, and have set their sights on the third spot currently in possession of Ajax – four points above them.

Sparta have been the better team in h2h clashes over the course of the past two decades. They scored twice or more in five of the past eight meetings, and lost just twice since 2011.

And it has been 18 years since the hosts managed to keep a clean sheet at this ground.

Who will win the match between Cambuur vs Sparta Rotterdam?

Cambuur are placed dead last in the table, and have just two wins to their name all through the campaign. They have a 100% losing record at home barring a single fixture, and they are also the only team to have scored fewer than 10 goals in the whole competition.

On top of that, they also have a poor h2h record against Sparta, who last lost a league game three months back.

Rotterdam scored two or more goals in five of the past eight h2h encounters, and scored three or more goals in two of the last four. They also failed to find the back of the net just twice since August – and these match-ups were against titans Feyenoord, and PSV.

On top of that, Cambuur have a single clean sheet to their name at home in the past 14 months.

As such, goals are expected quite in plenty this Saturday.

As mentioned before, Cambuur are the only team in the whole competition yet to score ten goals.

Couple that with the fact that Sparta are one of the most consistent squads in the league – and we arrive at the inference that chances are quite low for the hosts to find the back of the net this weekend.

Sparta are unbeaten in the league in the past three months, and they also won seven of their former eleven fixtures in all competitions. On top of that they have a great h2h record against this rival over the years.

Meanwhile, Cambuur are placed 18th in a table of 18, and have a 100% winless record all through this season – barring just two games. Moreover, they also have a 100% losing record at home disregarding just one appearance here.

Surely Sparta have the edge this weekend. And a win for them is placed at an odd of 2.25.

Going on, Cambuur have one of the worst defenses in the entire league, and they are by consensus the worst team in the competition. They have conceded goals quite in plenty in h2h clashes, and as such the in-form Rotterdam are expected to find the back of the net at least twice this Saturday.