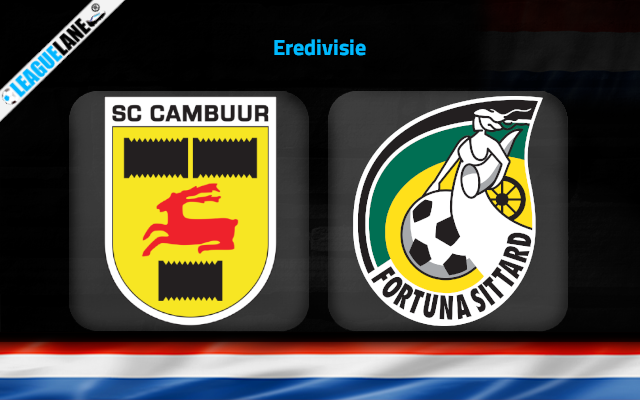 Cambuur vs Fortuna Sittard Predictions and Free Tips from our expert tipsters when the teams go head-to-head in Eredivisie on Sunday, 29 January 2023.

In the last two months, Cambuur’s form have gone downhill. They are in the relegation zone and have not won a league game at home since October. They did manage to win their last match against Groningen who are at the bottom of the table.

Meanwhile, Sittard’s three-game winless run finally ended when they defeated Heerenveen by 2-0. Manager Julio Velázquez will aim to finish this month on a good note and will expect his team to win all three points from this match.

Looking at 2022, Cambuur won both fixtures last year. The visitors have won three of the last five overall head-to-head matches against this team.

It is important to note that, Cambuur have not won a home match in the last three months. Also, they have lost more than 60% of the matches this campaign.

Who will win the match between Cambuur vs Fortuna Sittard?

It is important to understand that Cambuur are in the relegation zone and have one of the  worst winning forms in the league. Do note that, they are on a five-game losing streak at Cambuur Stadion. Therefore, the chances are high that Sittard will win this match.

In the last five matches, the host have scored only one goal, which was against Groningen who are just below them on the table ranking. At the same time, Sittard have scored consistently in their last three matches.

Sittard managed to defeat a top team like Heerenveen in their last league outing. Moreover, they have won this fixture on three of the last five occasions. Also, it is important to understand Cambuur have struggled against top teams in the last two months. Therefore, our first tip is that the Fortuna Sittard will win this game– the odd for this tip will be at 3.00 odd.

Also, you can back on Burak Yilmaz to score anytime – at 2.37. The main reason for this tip is that he is on a three-game goal-scoring streak. He scored the equaliser against PSV earlier this month.