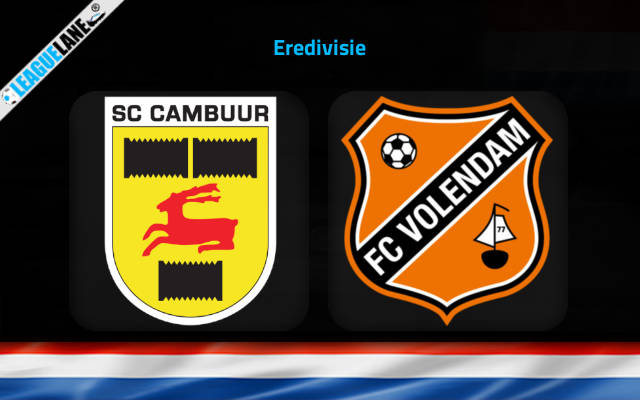 Cambuur vs FC Volendam Predictions and Free Tips from our expert tipsters when the teams go head-to-head in Eredivisie on Sunday, 08 January 2023.

Cambuur have the worst form in the league this season. They were busy during the break as they played various friendly games. They will play against their rivals Volendam for their first game of the year.

Last month, Volendam defeated Breda in a friendly game. They have won only a single game in the league. The only competition in which they have a chance to win a trophy is the KNVB Cup.

The visitors are on a two-game winning streak at Cambuur Stadion.

Back in 2021, Cambuur celebrated a huge 3-0 victory against this team, this is their first victory since 2019.

Who will win the match between Cambuur and FC Volendam?

This match will be between two teams that are in the relegation zone. Both teams have lost more than 70% of their matches this season.

Even in friendly games, both teams performed poorly. Even if the visitors win all three points, they will still remain in the relegation zone.

This fixture is a high-scoring one in recent times. In the last three head-to-head meetings, at least three goals have been scored combined. We can expect the same trend this time as well.

Both teams have scored in two of the last three head-to-head encounters at Cambuur Stadion. The only exception was during the 2020/21 season.

This match will give clear idea regarding which team will be relegated at the end of this season. The last five outings show that both teams have lost four consecutive games.
Therefore, the first tip is that the game will end in a draw– the odd for this tip will be at 3.50 odd.

The visitors held Emmen in a 1-1 draw in their away game before the break.

Our second tip is that Over 2.5 goals will be scored – the odd for this tip will be at 1.65. In three of the last four meetings, the game ended with at least three goals being scored combined.