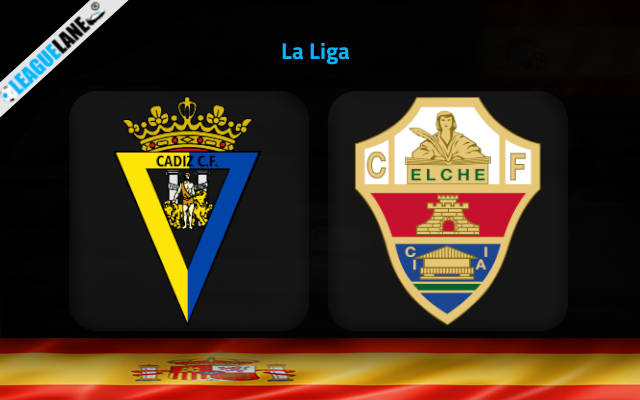 Cadiz and Elche will close Matchday No 17 in Spanish La Liga on Monday evening with the fixture at Estadio Nuevo Mirandilla.

The hosts will go into the tie in much higher spirits after a huge 0-1 victory over Valencia last weekend away at Estadio de Mestalla.

They jumped above Espanyol in the 18th position of the league ladder thanks to four points from the two league games after the World Cup break.

Ruben Alcaraz made the difference at Mestalla by bagging the early 9th-minute goal in a match in which Cadiz allowed Valencia only two shots on target in the 90 minutes of play.

Head coach Sergio Gonzalez Soriano can be thrilled with his team’s defensive showings in the last two outings as Cadiz conceded just one goal against Almeria and Valencia.

Cadiz will have a great chance to continue their fine defensive run here against Elche who have the weakest attacking record in the league.

Elche are firmly at the bottom of La Liga table having claimed no more than 4 points in 16 games so far in the season.

Being one foot in Segunda Division, Elche also own a terrible record on travels where they drew two and lost six of eight games in this term of La Liga.

There is really not much to suggest a positive scenario for the visitors on Monday at Estadio Nuevo Mirandilla.

It is very hard to look past the home win in a low-scoring affair scenario here. Elche will go into this off the back of five successive league losses. They have failed to score in any of the last three outings in all competitions, a thread that includes an embarrassing 1-0 loss away at lower-division Ceuta in the last 32 round of Copa del Rey.