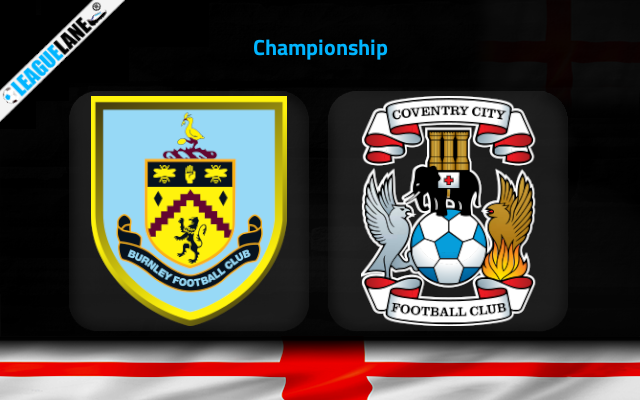 Burnley vs Coventry Predictions and Free Tips from our expert tipsters when the teams go head-to-head in the England Championship on Saturday, 14 January 2023.

It has been a while since Burnley has conceded a defeat in the league. They have been sealing victories consistently. Following a six-game winning thread will definitely boost them with spirits.

Coventry, who sits outside the top half in the standings following an inconsistent form, will be Burnley’s visiting rivals on Saturday.

Burnley is currently on a four-game unbeaten streak against Burnley. The reverse fixture had ended in a 0-1 win for Burnley.

At this venue, Burnley have only lost twice against Coventry. They netted in a total of 18 goals over the course of the last 9 meetings.

Who will win the match between Burnley vs Coventry?

Burnley have been sealing victories over every opponents they face at home in this season, except for a couple of draws. They are yet to concede a defeat at home.

Meanwhile, Coventry is on a two-game losing streak on the road. On top of that they rather have an inferior h2h form against Burnley. Therefore, we expect a win for Burnley on Saturday.

Burnley scored a total of 12 goals over the course of the last four home games. Their attacking stats alone goes past the over 2.5 goals rate.

On top of that, Burnley have an impressive goal-scoring record against Coventry. In that case, we expect this match to have over 2.5 goals.

Burnley’s defensive side have been delivering decent performances of late. They have managed to prevent goals from their opposition in four of the last six league matches. We therefore expect a one-sided affair at Turf Moor on Saturday.

Coventry doesn’t seem to have the potential to end the current winning form of Burnley. Moreover, Burnley have been the dominant force in the history of this match-up.