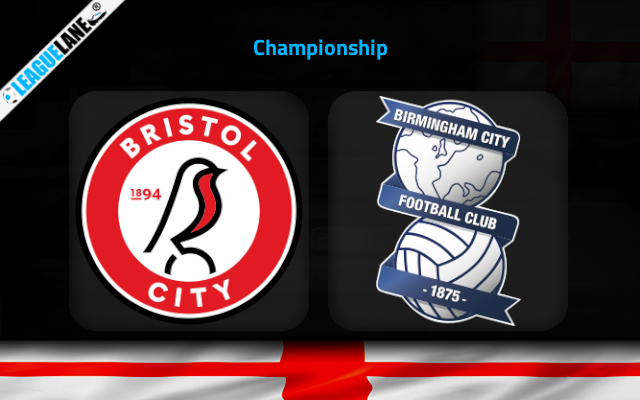 Bristol City vs Birmingham Predictions and Free Tips from our expert tipsters when the teams go head-to-head in the England Championship on Saturday, 14 January 2023.

Neither Bristol City nor Birmingham is having a decent form in the league lately. They both are following a streak of winless games and sits a position outside the top half in the standings.

Birmingham sits 17th in the standings, one spot above Bristol City. However, it is worth noting that they Birmingham lost the past three league fixtures in a row.

Birmingham can rely on the recent tradition since they won the previous three encounters against Bristol City. The reverse fixture ended in a 3-0 win for Birmingham.

At this venue, Birmingham is on a four-game winning streak against Bristol City. Four of the past five meetings at this venue had goals from both sides.

Who will win the match between Bristol City vs Birmingham?

Bristol City were unbeaten in 7 of their 13 home outings so far in this season. Although it looks weak for a team in their safe patch, it will count much here as they faces Birmingham, who were winless in 8 of their 12 away matches.

For the above reasons, we are expecting a win for Bristol City despite of their inferior head to head form against Birmingham.

More than 50% of the matches played by these two teams had under 2.5 goals ft. It deserves to mention that Bristol have displayed this trend consistently at home. Therefore, we expect this match to have under 2.5 goals.

Birmingham have failed to score in the past two road trips. Since we expect a result in favour of Bristol City, our pick is for a one-sided match at Ashton Gate Stadium on Saturday.

We are anticipating an encounter with Bristol City delivering a pleasant display for the local supporters on Saturday. They are priced at 2.10 odds and we like to place it as the main betting pick here.

For the second tip, under 2.5 goals at 1.73 odds seems ideal enough as Bristol City have been recording low-scoring affairs consistently at home.