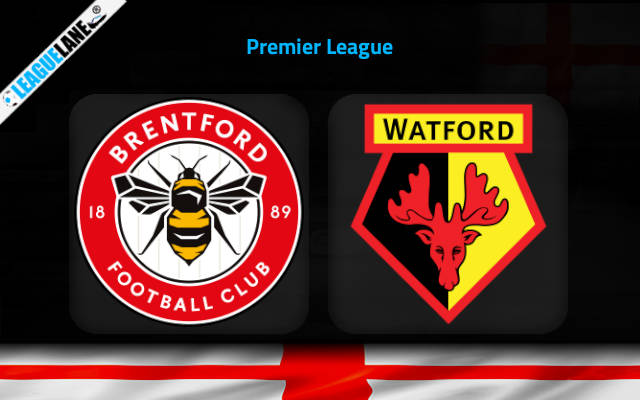 Watford have been a total mess lately, and by all accounts they are making a return back to the relegation zone. Currently, they are placed 17th in the table, with a surplus of just three points over the cut-off. And do note that they have played an extra game.

Brentford, who have had to take on some tough opponents in recent weeks, will greatly appreciate this opportunity and will gun for the three points.

Anyhow, considering the defensive performances of both teams in the past few match-days, expect a high-scoring affair this weekend.

Brentford were held to a 2-2 draw the last match-day, by Leeds. They have also lost just once in the past four fixtures, and it was against Antonio Conte’s Tottenham.

Going on, they have been scoring well lately, and particularly so at home.

On the other hand, Watford lost 1-3 at home the past game week, against Manchester City. They had also lost seven of the former nine matches, and they had conceded a total of nine goals from the last three fixtures alone.

Moreover, they have also not fared well in recent h2h clashes, and judging all these factors, expect Brentford to have the upper hand this Friday at their home.

However, both teams have been conceding goals in huge numbers for the past several game weeks, and it’s a given that either will go for the win this Friday.

Chances are high that we will witness goals in plenty from both sides of the pitch this weekend.

Tips for Brentford vs Watford