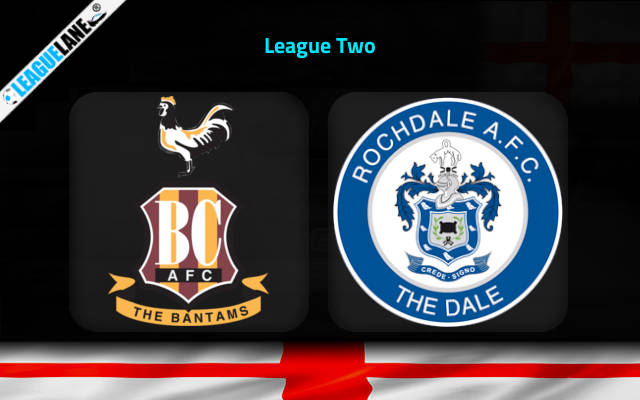 Bradford City vs Rochdale Predictions and Free Tips from our expert tipsters when the teams go head-to-head in the England League Two on Wednesday, 11 January 2023.

Bradford City have maintained their decent form so far in this season. They have overcome their recent slump by sealing back-to-back wins in the last two league fixtures.

In the standings, they are at the 5th position at the moment. They will be hoping to make it three wins in a row as they prepares to face Rochdale, who sits inside the danger zone, on Wednesday.

Bradford won three of the last five head to head clashes against Rochdale. The latest meeting ended in a goalless draw.

At this venue, Bradford was unbeaten in four of the last six meetings against Rochdale. The Bantams netted in a total of 14 goals over the course of the last 7 encounters.

Who will win the match between Bradford City vs Rochdale?

We are counting on Bradford City as they are having a better form and consistency when compared with Rochdale. They are on a four-game unbeaten streak at home too.

Knowing that Rochdale follows a five-game winless streak on the road, we have enough of reasons to expect a win for Bradford.

The defensive side of Bradford City looks average. But Rochdale, who have not scored in three of the last four road trips, cannot be relied here in terms of slotting one past Bradford.

Since Bradford’s firepower have only scored a total of 7 goals in the past five home outings, expect an under 2.5 goals ft display here.

We have already mentioned that Rochdale’s offensive side doesn’t display a potential to enter the score-sheet here. For the above reasons, we quite don’t see the value of backing both teams to score at 1.83 odds here.

The current fifth spot in the standings, Bradford City are likely to climb into a much better spot on Wednesday. Backing them to win at 1.80 odds will be our main betting tip here.

Their goal-scoring trend of late doesn’t suggest an over 2.5 goals scenario. With these two teams having more than 50% of the matches with goals under 2.5, we like to place it as the second betting option at 1.83 odds.