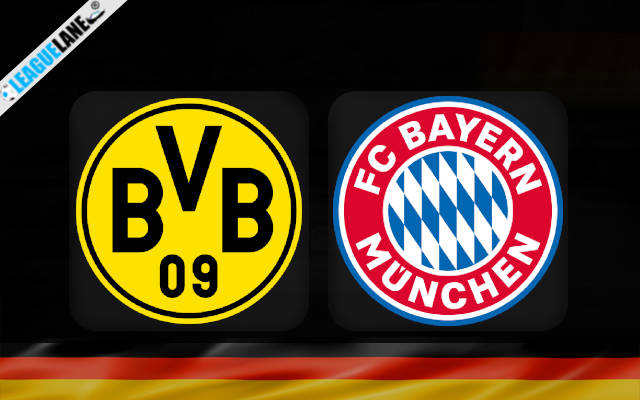 Borussia Dortmund will welcome Bayern Munich to Signal Iduna Park as they renew their rivalry in yet another edition of Der Klassiker this Saturday evening. Read our Preview, Predictions, and Betting Tips with Analysis here.

Bayern Munich has dominated Bundesliga for over a decade now winning the Bundesliga in 9 consecutive seasons. Alongside them, Borussia Dortmund has played second fiddle having finished runners up in 5 of those seasons.

However, these teams have never failed to entertain and produced some classics over the years. With their clash arguably being the most high profile game in German football, expect a cracking contest.

Both teams will go into the match following wins in their preceding fixture. While Dortmund won 1-3 at the Volkswagen Stadium against Wolfsburg, Bayern managed a 1-0 win against Arminia Bielefeld at home.

The Reds have ripped apart opponents to shreds both domestically and on the European stage. They have arguably been the most dominant club for over a couple of years now. Despite such accolades, the club has faced a few hiccups recently. Most notably their embarrassing 5-0 loss against Gladbach on the road.

In addition to that, the club has dropped points thrice this season in the league. They were not able to find the winner against Gladbach in the opening match of the league and the game ended 1-1 on the road. They have further lost against Frankfurt and Augsburg in home and away fixtures.

In the awe of the Bavarians, it is easy to overlook the fine run Die Borussen are on in the league. The club has won all their league matches disregarding their losses against Leipzig, Freiburg and Gladbach. This has kept them second in the Bundesliga just a point behind their opponents for the weekend.

The club has been knocked out of the Champions League following their loss against Sporting by a 3-1 score line in Lisbon. They will compete in the round of 32 of the Europa League in 2022.

As much as many would want the Bundesliga to change hands this season I don’t see that happening. Considering their superior h2h record and their scary form it is difficult to bet against Bayern.

The hosts and visitors have scored an average of 2.53 and 3.23 goals per game in the league a 2 step wager for over 3.5 goals along with Bayern winning should provide excellent value.

While FCB has conceded the least goals in the league, not even their mighty defence could stop the young and exciting Dortmund frontline from scoring at least a goal. So I have backed both teams to score.

While Ballon d’Or runner up Robert Lewandowski might very well score in the fixture, there is not much money to be made. Alternatively, Norwegian goal machine Haaland scoring might be the way to go.