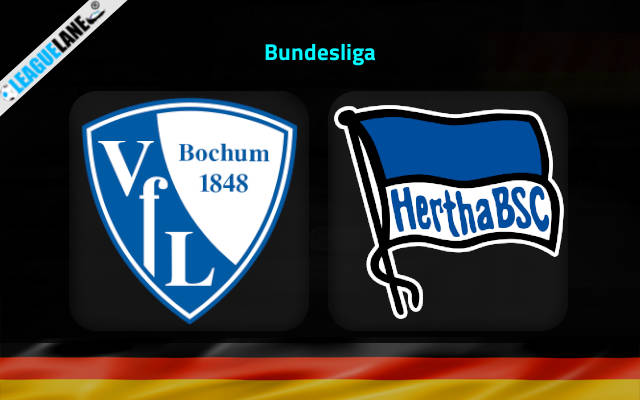 Bochum vs Hertha Berlin Predictions and Free Tips from our expert tipsters when the teams go head-to-head in German Bundesliga on Saturday, 21 January 2023.

Bochum might have recorded just four wins in total through this league campaign, but three of these came in the last five match-days in the competition. They are desperately now going after a spot above the relegation cut-off.

Meanwhile, Hertha are on a worrying stretch of performances – particularly on the road. They won just thrice in the current edition of the Bundesliga, and all three victories came against teams placed 13th or below in the table.

Goals have always come in plenty between these two squads. In fact, the last four clashes in a row had goals from either side of the pitch, and two of these had four or more goals as well. It is also to be noted that the last Bochum were able to keep a clean sheet at home was back in 2009.

Who will win the match between Bochum and Hertha Berlin?

Despite their poor start to the campaign, Bochum are currently in good form. They won their last three appearances at home, and scored seven goals in the process. Meanwhile, Hertha registered a single win on the road this whole league season, and it came against the struggling Augsburg.

As such, hosts Bochum are the logical pick to deliver the win this weekend.

Defense has not been a strong area for either of these squads. In fact, Bochum might be the favorites for this fixture, but they have the worse defense in the league.

On top of that, Hertha have a single clean sheet on the road in the last eight months. And with previous h2h clashes having goals in huge numbers as well, more of the same is expected this Saturday too.

As mentioned, Bochum have the worst defense in the league. Only two teams conceded more than 30 goals in the competition, and they are the only ones to have let in more than 35. Moreover, they also let in goals in plenty in past h2h meetings.

And combining that with the poor defense of Hertha – we infer that goals will come from either end of the pitch.

Bochum are currently on a good stretch of performances. In fact, they are on a three-game winning streak at home, and scored seven goals in the process.

On the other hand, Hertha could muster just three wins in total through the campaign, and all three came against teams struggling to avoid relegation. In addition, they have also been a total failure on the road since May of 2022.

As such, Bochum to Win at an odd of 2.60 is the optimal bet this weekend.

Coming to goals though, the hosts are terrible with their defense – and they have always been in past h2h clashes too. They are considered the favorites for this weekend, but they are not by any chance expected to keep a clean sheet.