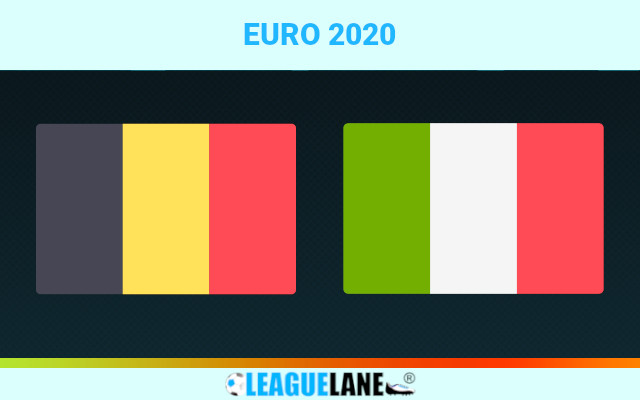 An exciting match is on the prospect when Belgium takes on Italy in the Euro 2020 quarterfinal.

Both teams had to toil hard to win in the round of 16, but the Belgians had the toughest of opponents in the form of Portugal.

A wonder strike from Thorgan Hazard close to half time whistle made the difference, though they had several other chances to extend the lead.

Roberto Martinez lost both Kevin de Bruyne and Eden Hazard through injuries in the second half, but the Belgian backline gave very little to the Ronaldo and co in either half.  The full-time scoreline was fully justified though full-back Raphael Guerreiro came close to scoring in the final minutes, but his shot from a difficult angle hit the post.

Belgium’s unbeaten run across all competitions stand at 13 games with wins in 11. Denmark is the only team to score against them in the competition, but Portugal was their first real test at Euro and Italy is nothing short of a world class team at this point of time.

Italy went into their round of 16 fixture as heavy favourites, and we were expecting a solid win on a convincing margin. But Austria had other plans and they surprised the Italians with their attitude and fighting spirit.

Franco Foda’s men were solid in defense, and they had the better chance and even scored only to deny by offside call. Chances were far and few in the first 90 minutes, but the quality in the Italian side came to play in the extra time and substitutes Chiesa and Pessina find the back of the net in the first half of extra time. Austria continued to threaten but Kalajdzic’s late goal provided some consolation in a highly spirited performance.

With the win, Italy have now stretched their unbeaten run across all competitions to 31 games, their last defeat dating back to September 2018 in the Nations League fixture against Portugal. Kalajdzic’s goal is the first Italy conceded after winning the previous 11 with clean sheets.

Kevin De Bruyne and Eden Hazard are big doubts for this crucial quarter final clash against Italy after limping off with injuries against Portugal. There is little time for either player to return to full fitness, Dries Mertens and Yannick Carrasco are obvious replacements.

Thomas Vermaelen is also struggling with a minor knock; however, he is expected to be fit for Friday’s match.

Lorenzo Pellegrini is the only player out with injury for Italy and Mancini is handed a boost with the return of Giorgio Chiellini and Alessandro Florenzi to full-fitness, though Giovanni Di Lorenzo is expected to continue at right back.

Federico Chiesa made the difference against Austria and he was the best player against Wales and could replace Domenico Berardi to partner Immobile and Insigne.

Their last meeting was at Euro 2016, opening group game and the Italians bagged a 2-0 win. Around 16 years ago, in 2000, Italy won against at the Euros with the exact similar scoreline.

The teams were grouped together in 1980 as well and that time they played out a goal-less draw. So Italy remain unbeaten with 2 wins from latest three meetings at Euro with clean sheets in all.

There have been only 3 other meetings between 1980 and today, all friendlies, strange enough to say that all three games saw the same 3-1 scoreline, Belgians won twice and Italy the other.

There will be no shortage of entertainment when these two attacking oriented teams lock horns at Munich. Therefore, my first pick is over 2.5 goals, and this is a bet that offer good value for money with the likes of Immobile and Lukaku in play.

Italy is the team with better chance to win here, and their chances are further boosted by Belgium losing their two key players Eden Hazard and Kevin de Bruyne. Meantime, Roberto Mancini is not short of options, thanks to a well-balanced squad with plenty of like-to-like-replacements.