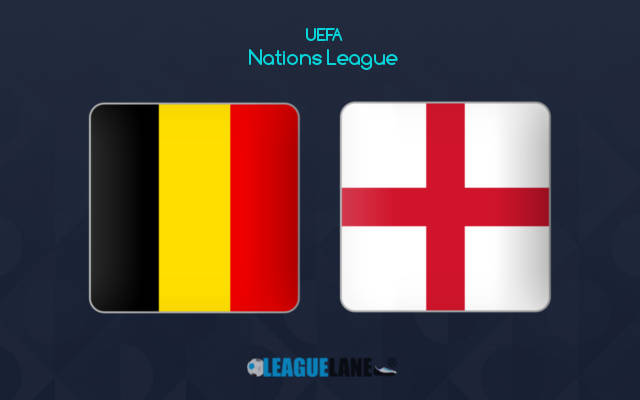 The most anticipated UEFA Nations League clash this Sunday is taking place in Haverlee where Belgium welcomes England.

The Three Lions have ruined all the good work achieved in the first three games by losing to Denmark at home venue in the previous round. Now they are obligated to beat the Red Devils on the road, which is going to be very rough task.

Belgium are comfortably sitting at the top of the group with nine points, so even one point from this clash could work for them and secure semi-finals ticket. Hosts are warm favorites for the win, currently priced at 2.37 rate.

These two opponents have played a lot of important head to head clashes recently. We all remember two duels in World Cup 2018 in Russia when Belgium won the group stage duel 1-0 and 2-0 win in the battle for bronze medal.

When it comes to all-time stats, The Red Devils have minimal 4-3 advantage in terms of victories. England never managed to beat this opponent on the road so far.

There was a total of 21 goals scored in previous h2h’s, which averages 2.33 per duel.

Belgium’s coach Roberto Martinez is known for making a lot of rotations in friendly international matches. That was the case during the mid-week clash against Switzerland too.

Despite being behind for most of the time, The Red Devils won that match 2-1 thanks to the two goals scored by Michy Batshuayi in the second half. The team have three victories and a loss in UEFA Nations League, losing exactly to upcoming opponents England 1-2 at Wembley. Goal scorer from that game Romelu Lukaku is expected to take place in the starting XI on Sunday.

England’s general test for this clash was successful. They were victorious in a friendly match against Republic of Ireland. It was a quite convincing win 3-0, and it surely had big impact on team’s spirit ahead of the big match. Calvert-Lewin once again scored for the national team, as well as Sancho and Maguire.

We are about to see if unexpected home loss to Denmark was just a bad day for Southgate’s boys. Both sides have incredible attacking potential, so approach through the goals market is the best idea.