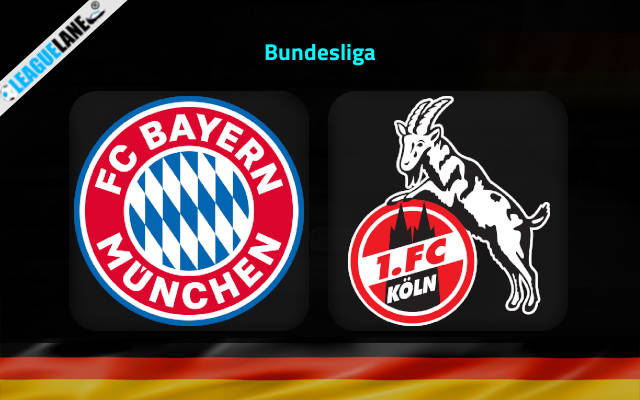 Bayern Munich vs FC Koln Predictions and Free Tips from our expert tipsters when the teams go head-to-head in German Bundesliga on Tuesday, 24 January 2023.

The Bavarians have no intention of letting go of their stronghold on the German crown. After ten straight titles, they are going for the next one. As of now, they are at the top of the table with a five-point lead.

Meanwhile, Koln are stuck in the bottom half of the table, and have just five wins to their name all through the campaign. And most importantly, only one of these wins came on the road.

The Bavarians recorded a 0-4 win on the road the last time these two met on the pitch, and they are also on a nine-game winning streak. And it also needs to be noted that the reigning champions slotted in 25 goals just from the past seven h2h clashes.

Who will win the match between Bayern Munich and FC Koln?

The toppers have an absolutely terrifying h2h record against this opponent, and at this stadium it becomes even more worrisome.

Meanwhile, Koln have been one of the worst teams on the road this season in the German top flight. In fact, they have a 100% winless record barring a single victory, and they also lost five of their past six road trips.

Surely count on Bayern Munich to deliver a winning performance this Tuesday.

The title-holders registered a 0-4 win on the road the last time these two locked horns on the pitch, and that too on the road. This time they are at the Allianz Arena, their home.

On top of that, Koln let in 16 goals from their past six road trips combined, and conceded 25 goals in total from their previous seven h2h meetings.

The chances of this clash turning into a high-scoring affair is quite high.

It looks as if the guests will have to return home empty-handed.

The Bavarians are in hunt for an eleventh straight title, and are in great from. They are at home this Tuesday, and have a superb h2h record against this opponent.

Meanwhile, Koln have a 100% winless record on the road this league season, barring a single game. It certainly looks as if the toppers are about to deliver a tenth straight h2h win.

Coming to goals, it goes without saying that Bayern are the best offense in the Bundesliga. So far they scored 50 goals from their 16 fixtures, and at home their form has only been even more terrifying.

Meanwhile, Koln always conceded in plenty in h2h meetings, and only one team has let in more goals than them in the Bundesliga this whole season on the road.

As such, chances are very high for goals to come in plenty. An Over 1.5 First Half Goals at an odd of 1.80 looks very promising.