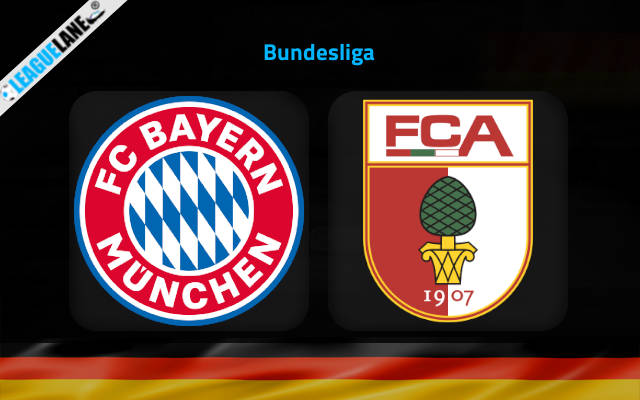 Bayern Munich are marching towards their record-breaking tenth consecutive Bundesliga title. They increased the gap at the top of the table to nine points after Borussia Dortmund’s tough home loss to RB Leipzig last weekend.

The Bavarians were supposed to have hard times against Champions League hopefuls Freiburg seven days ago but they ended up scoring as many as four goals in a demolishing 1-4 victory at Europa-Park Stadion.

It was the second successive league game with four goals scored for Julian Nagelsmann’s troops. They confirmed a fabulous attacking form by registering eleven attempts on target last time out.

Bayern Munich will have a great chance to maintain their tremendous goal-scoring form on Saturday afternoon when they play host to relegation-threatened Augsburg in the 29th round of Bundesliga.

The visitors have escaped the red zone after a run of two wins in the last three Bundesliga rounds.

Nevertheless, they did not quite shine in the last weekend’s win over Wolfsburg despite netting three unanswered goals on the occasion.

The team led by Markus Weinzierl faced 17 shots in the mentioned win. They have generally been struggling to keep things quiet defensively of late, especially on travels.

Augsburg allowed at least three goals in four of the previous five away outings in Bundesliga. It is certainly not the form you want to have going face to face with the deadliest attacking line in the country.

Bayern Munich have scored four goals in each of the last two Bundesliga games. They have also bagged seven goals in a demolishing home victory over Salzburg in the reverse fixture of their UEFA Champions League tie a month ago in Munich.