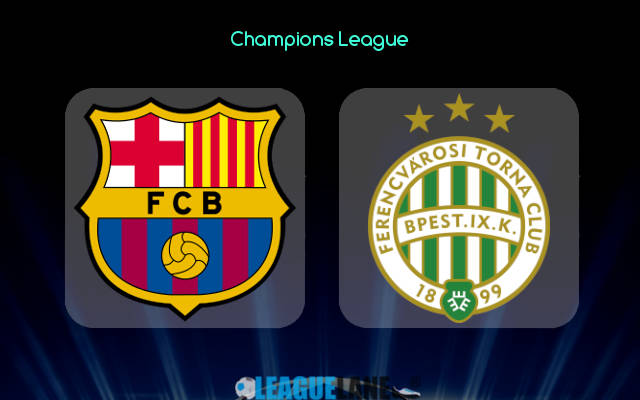 With Juventus in the group, the Catalonians will not take other clashes with ease. The match with Ferencvaros will most likely be a training encounter for Barcelona prior to the much-anticipated clash between Cristiano Ronaldo and Lionel Messi later in the Champions League schedule.

It was a tough week for Barcelona at La Liga with their last match on the road against Getafe resulting in a 1-0 loss in the league. It was their second consecutive winless game in La Liga, but Seiten will not be concerned as they are facing Ferencvaros from an inferior league, Hungary OTP.

The visitor is on the back of a 12-game unbeaten run across all major competitions in the league. However, their triumphs cannot be compared with the competitive nature of La Liga. They will visit on the back of a 0-2 win on the road against the likes of Kisvarda in the OTP Liga.

Barca’s only meeting with a Hungarian club happened in 1975/76 UEFA Cup, against Vasas FC. They tasted victory in both legs, 3-1 at Camp Nou and 1-0 in the away leg.

Meantime, Ferencvaros faced Spanish clubs on 3 times and most recently in last season’s Europa League group stage against Barcelona’s cross city rivals Espanyol. Both games were stalemates, 2-2 home and 1-1 away.

They also met Real Madrid in the 95/96 Champions League group. They drew at home on that occasion after losing 6-1 at Madrid.

There is no doubt that the match is sizing to be a home win in full-time. The low odds for the home win at 1.08 suggest the probability of Messi and Co. moving forward in the group this season. Their previous clash in the Champions League remains a nightmare as the 2-8 loss to Bayern Munich.

With their ground advantage in the game, Barca will be able to recover from that loss. Besides, Ferencvaros is comparatively an inferior side based on their squad strength. Hence, backing the home team for winning both halves might probably do the trick for the punters.

Furthermore, we cannot assert that the Hungarian outlook might go past the Catalonian defense in ninety minutes, especially when Camp Nou is the strongest suit for Seiten’s men. So, the tip for no BTTS will probably be the best bet for the punters along with under 4.5 goals from the goals area.