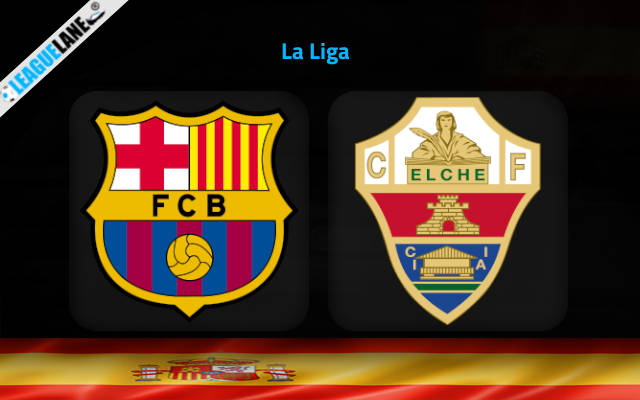 Barcelona should consider themselves lucky for having lost against Bayern in the Champions League, despite being the better team on the pitch. Anyhow, they need a huge win to get their momentum back, and count on them to deliver such a performance this weekend at the Nou Camp, against Elche.

Elche were one of the weakest teams in the Spanish top flight the last season, and they finished 13th in the table at the end of the campaign. They managed to post just 11 wins in total, and they posted a goal difference of -12 as well.

Going on, this time around, they are possibly one of the absolute worst. They are placed 19th in a table of 20, and have a 100% losing record disregarding a single draw.

They are one of the only two teams yet to register a victory in the league, and only Cadiz have scored fewer or conceded more than them.

Meanwhile, with a 15-1 combined scorecard from five games so far, the Catalans have the best offensive as well as defensive records in the tournament.

Moreover, they are placed second in the table at the moment, and are trailing two points below toppers Real Madrid.

However, the Madrid derby takes place this same game week, and chances are high that the Royal Whites might drop points. This is the opportunity for Xavi’s men to go after the top-most spot.

Furthermore, they have a great h2h record against this rival too.

All observations point towards a huge win for Barcelona.

Xavi’s men were unbeaten in 18 of their past 20 overall fixtures, and they won four of their past five games. In fact, their only loss in the past few months came against Bayern Munich at the Allianz Arena, in the Champions League.

By all means, Xavi’s men are the overwhelming favorites this weekend against the struggling Elche, who have a 100% losing record, barring a single draw.

Expect a dominant win for Barca this Saturday.

Tips for Barcelona vs Elche