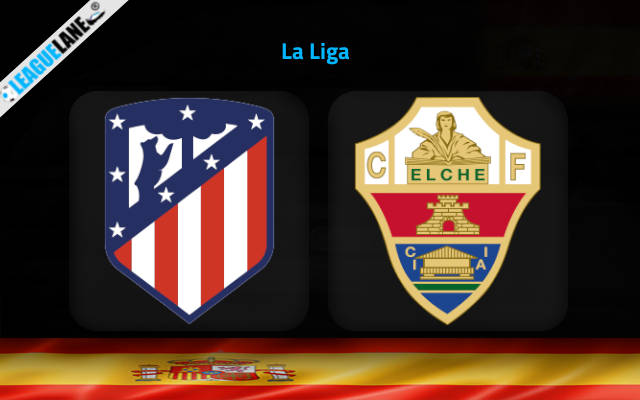 Atletico Madrid took just one point in the previous three La Liga rounds. They dropped out of the top-four in the league table as a consequence.

However, Diego Simeone’s men will get a nice opportunity to return to winning ways on Thursday evening when they welcome the rock-bottomed Elche to Estadio Wanda Metropolitano.

This is the easiest fixture any team can have in the Spanish top flight because Elche are the weakest team In the division by a mile.

The visitors are one foot in the second tier, having only claimed 4 points in 14 rounds so far in the season.

Elche are the only winless team in the league and the only side with a single-digit number of points in the elite class.

They own by far the worst defensive record in the competition with 31 goals conceded so far in the season.

This will be the music to the ears of Alvaro Morata, Yannick Carrasco, and company. The latter bagged a brace in Atletico’s 1-3 road win over lower-division Arenteiro in the last week’s second round of Copa del Rey.

We should say that Elche were also successful in this stage of the competition, beating Guadalajara 0-3 on the road nine days ago.

This should be a one-way street from the start to the end, especially since Atletico Madrid will be extra motivated to rebound after the poor thread in the last three league rounds.

Knowing Elche scored just one goal in the last five H2H affairs against Los Colchoneros, we will back Atletico Madrid to win to nil at the 1.83 odds. The best value is at the 3.25 odds offered for in-form Yannick Carrasco to score anytime for the hosts.