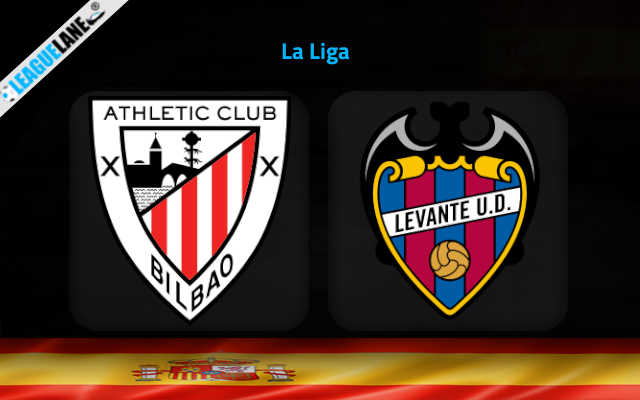 Athletic Bilbao aim to get back to winning ways when they welcome Levante for Monday’s Spanish La Liga clash.

Marcelino’s men were eliminated from Copa del Rey in midweek, courtesy of a narrow 1-0 defeat at Valencia. They can now solely focus on La Liga and with a top six finish there for the taking.

However, Bilbao must improve their home record for the same, especially while coming up against teams like Levante.

Right now, they have 3 wins from the last 5 home games which includes a massive 4-0 win against Real Sociedad in the most recent outing at the San Mames.

Yet, their consistency will be tested with the previous 10 home games producing just 3 wins.

Levante are sitting at the foot of the table and it will take a massive effort to avoid the drop with safety 8 points away.

Their recent performances have improved, 2 wins and a draw from the latest three including a morale boosting 1-0 win away at Atletico Madrid.

Alessio Lisci’s men certainly have the momentum at this point of time, it remains to be seen if they can carry on and bag a big upset at San Mames on Monday night.

Defending remains a key area of improvement for Lisci’s men and Bilbao’s strong home form means we may not go wrong by backing the home win.

Despite the positives, Bilbao have managed to keep just 3 clean sheets from their 12 home matches this season. This means both teams to score is the value bet, also considering the high percentage of h2h games ended with the same.