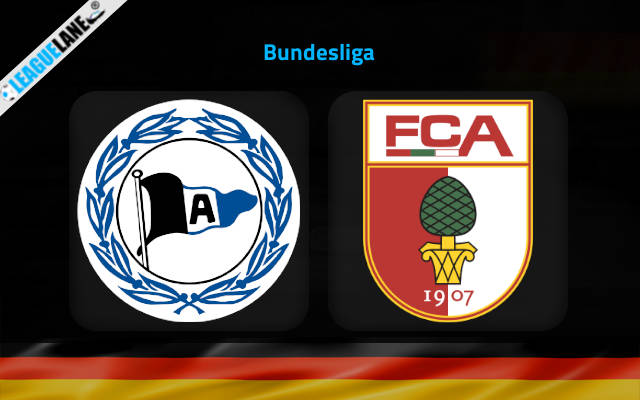 Arminia Bielefeld and Augsburg are separated by only two points right on the brink of the red zone in the Bundesliga standings, going into the Bundesliga Matchday No 25 opener on Friday evening at SchucoArena.

Augsburg should enter the tie in higher spirits after a 1-1 draw to Borussia Dortmund six days ago.

They never gave up despite conceding first as substitute Noah Sarenren-Bazee eventually found the late equalizer twelve minutes from time.

Augsburg thus bounced back from consecutive defeats to Borussia Monchengladbach and Freiburg and they have definitely improved the atmosphere in the dressing room as a consequence.

The story is completely opposite with Arminia Bielefeld who have suffered a tough 3-0 loss away at Bayer Leverkusen last weekend.

The team led by Frank Kramer revealed way too many defensive holes on the occasion, letting Die Werkself register 21 shots towards their goal at BayArena.

Kramer will, however, rely on his team’s strong form at SchucoArena where Bielefeld are unbeaten in six straight outings in the league.

To be fair, Arminia have had an easier schedule at home recently. On the other side, we can’t consider Augsburg a tough opposition either which is why we would not go with the away win picks here.

We believe the time has come for the low-scoring trend in this matchup to be terminated here. Arminia have been way too vulnerable at the back last weekend at Bayer Leverkusen and we can hardly see them keeping a clean sheet here.

On the other side, we have Augsburg who have not played defense at all in their recent fixtures on the road. Augsburg conceded eleven goals in the last three away losses to Hoffenheim, Bayer Leverkusen, and Borussia Monchengladbach. You can back goals at both ends at the odds of 1.80.