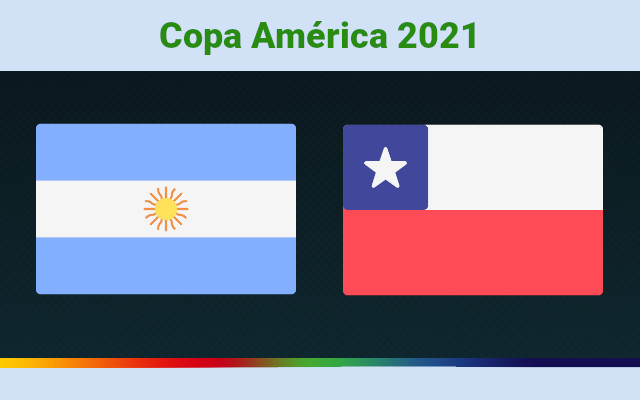 Argentina and Chile set fire to Group B of Copa America 2021 when they lock horns on Monday evening.

This fixture has become a regular at Copa America of late and there exists a tense rivalry between the teams. Chile denied Argentina the trophy on two consecutive occasions, both in penalty-shootout. The Albiceleste finally restored some pride by winning the third-place play-off in the last edition in the regular time.

The teams met for the World Cup qualifying fixture last Wednesday and cancelled each other and there are holes to close for both sides when they take the field against each other in exactly five days at a different venue.

Argentina are a handful to face in the group stages of this competition and they made it to the knockouts in stunning style in each of the editions since 1997. They made it to the finals on six occasions during the period and became champions in 1991 and 1993. But they lost in four finals between 2004 and 2016 and last time in 2019 a third place finish.

Chile, first one the trophy in 2015 at their home soil and then again in 2016. And in the last edition, they reached the semis before bowing out to Peru and eventually defeated by Argentina in the third place play-off.

This will be the last time this golden generation of La Roja appears in a major tournament. The likes of Alexis Sanchez, Arturo Vidal, Claudio Bravo, Gary Medel and Maurico Isla have all past their prime.

Lionel Messi and Alexis Sanchez were on target in the 1-1 draw when these two teams met in the qualifiers on Wednesday.

The teams also met in a friendly in 2019, ended goal-less this is their only other meetings since the play-off fixture at Centenaro edition.

However, Argentina are unbeaten in the last 10 meetings against Chile, considering only the results from 90 minutes of football. The win-draw-loss stat is 6 wins and 4 draws.

At Copa America, Argentina are yet to lose a match inside the 90 minutes, looking at games since 1916.

Argentina are coming to this competition on the back of consecutive scored draws in the qualification fixtures in June. They had the upper hand and majority as well as clear chances in both games, yet poor game management and tactical incompetence came to hurt them in the end.

Some minor tweaks could help them get better results in the competition and it will be worth noting that they are unbeaten in the qualifiers yet they must start to convert strong starts and leads into wins.

Meanwhile Chile drew Bolivia, the weakest South American team at the moment and ended the qualification round with 1 win from 6 games. On top of that, they conceded in all except 1, while goals have dried at their end.

Although Argentina is the better side on paper, this is nothing less than a derby and I expect a fairly open game and goals at either end. But the quality in this Albiceleste squad could take them over the finishing line with 3 vital points.