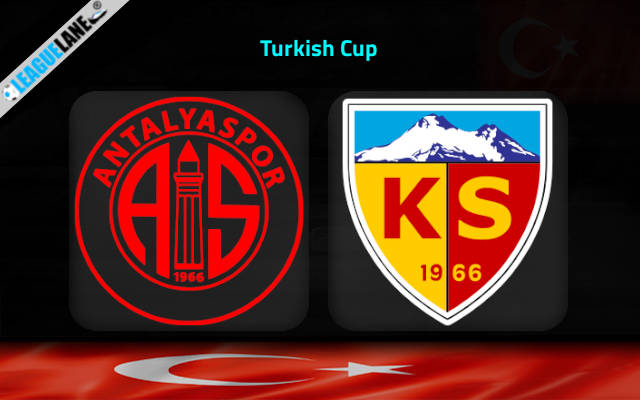 Antalyaspor vs Kayserispor Predictions and Free Tips from our expert tipsters when the teams go head-to-head in Turkish Cup on Tuesday, 17 January 2023.

Antalyaspor are on a long stretch of poor performances, and it is no wonder that they are struggling to stay above the relegation cut-off. Such has been their worrying form, that the last they registered a win in the league was three months back.

Meanwhile, Kayserispor are trying their best to find their pre-World Cup form. Before the break they were delivering great performances one after the other, and lately it has not been all too well for them. The team hopes they could use this upcoming encounter to secure a confidence-boosting win.

The latest encounter between the two ended in a 1-0 win for Kayserispor, and it took place just three months before. They also won two of the former three clashes, and have remained unbeaten for the past two years.

Who will win the match between Antalyaspor and Kayserispor?

Kayserispor are one of the top-rated teams in the Turkish top flight, and are going after one of the European spots. Meanwhile, their counterparts are struggling to stay afloat of the relegation cut-off.

Going on, Kayserispor also have a good h2h record in the past few years, and have delivered consistent performances on the road all through this season. They are rightfully considered the favorites this Tuesday.

Antalyaspor are struggling with their out-of-form defense. In fact, they have just two clean sheets at home since March, and both came against teams from lower divisions.

At the same time, the visitors of the day are putting forth consistent offensive performances, and have done so in recent h2h clashes too. It is logical to expect goals in good numbers this game week.

For all their heroics, Kayserispor have not been good with their defense – and especially since the season resumed after the World Cup. In fact, they let in ten goals from their previous four games combined.

It is also to be noted that their latest clean sheet on the road came three months back. As such, chances are high for goals to come from either end of the pitch.

Kayserispor have a great h2h record against this rival in the last two years, and they have also been one of the best teams on the road in the Super Lig this time around.

Meanwhile, Antalyaspor have been a total mess all through the campaign – and particularly in the last three months. They are conceding goals in huge numbers, and as a matter of fact, their only victory in the past two months came against a team from the lower division.

Likely, Kayserispor to Win at an odd of 3.50 is a bet of great value. And if you would prefer to be on a much safer side, go for the Draw No Bet on the team at an odd of 2.60.

Coming to goals though – Kayserispor have not been impressive at all. Particularly on the road they have been struggling to keep clean sheets right from the start of the season.

Surely the Both Teams to Score wager at an odd of 1.83 is a good second tip here.