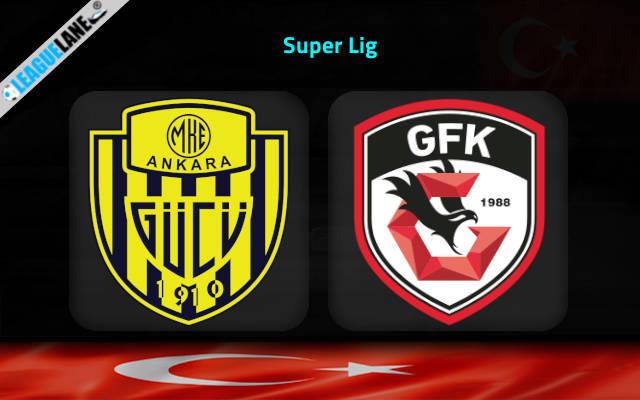 Ankaragucu vs Gaziantep Predictions and Free Tips from our expert tipsters when the teams go head-to-head in Super Lig on Saturday, 28 January 2023.

A brilliant performance from Sivasspor helped them defeat Gaziantep by 2-1 recently. Manager Erol Bulut is worried as this is their second consecutive defeat in the league. Now they will face Ankaragucu on matchday 20.

Meanwhile, Ankaragucu celebrated their sixth win of the season as they defeated Konyaspor by 1-0. Earlier they defeated Besiktas in the Turkish Cup on penalties. It is important to note that they have won all of their home matches this month.

Gaziantep are on a two-game winning streak against this team. They won the August fixture of last year by a narrow 1-0 score line.

The last time the host won this fixture was nearly five years ago. At this ground, the visitors have won three of the last four head-to-head meetings.

Who will win the match between Ankaragucu and Gaziantep?

Gaziantep are going through a bad form in the league presently. The last time they won a league fixture was way back in October. They have shifted their focus towards the Turkish Cup and as a result they are facing a winless drought in their Super Lig fixtures.

At the same time, the host have won two of their last three outings. Therefore, they have a better chance to win this game.

Post 2019, this fixture has been a low-scoring one. In the last four meetings, the game ended with not more than two goals combined.

The host have scored in every match starting in October. A similar pattern is also observed in Gaziantep’s away trips as well. Therefore, it will be a wise decision to back both teams to score in this match.

The host have won three of their last four outings in all competitions. They recently defeated a top team like Konyaspor by 1-0. Therefore, our first tip is that Ankaragucu will win this game– the odd for this tip will be at 1.85 odd.

Also, a good second tip to follow up would be to back on Both teams to score – at 1.72. Both teams are scoring goals consistently in their league fixtures in the last three months.