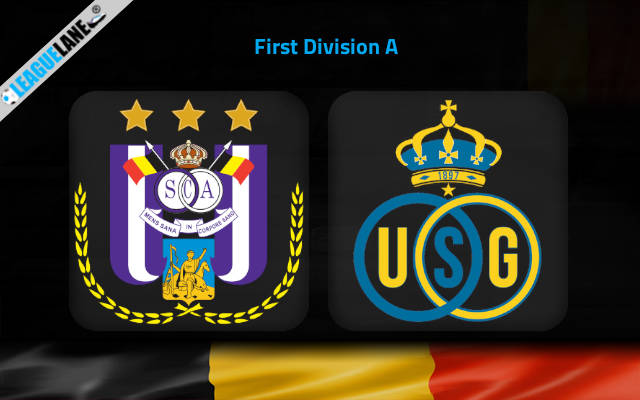 Anderlecht vs Union St. Gilloise Predictions and Free Tips from our expert tipsters when the teams go head-to-head in the Belgium Jupiler League on Sunday, 8 January 2023.

Anderlecht’s so far run this season seems inconsistent. They are currently at 11th position in the league standings, three points away from the safe zone.

Union St. Gilloise will be their rivals on Sunday. It would be a tough test as the Royals have been enjoying an impressive form all through this campaign. They are currently at second position in the league standings.

Union St. Gilloise have been the dominant force in the history of this match-up. They have a 100% winning record against Anderlecht barring a single fixture.

The Royals won all their three road trip clashes against Anderlecht. They have netted in a total of 8 goals from those three away encounters.

Who will win the match between Anderlecht vs Union St. Gilloise?

We are betting on Union St. Gilloise to seal a win here because they have an upper hand in every comparative stats against Anderlecht at present.

Do also note that Union SG have won all their road trips after conceding a defeat against Antwerp in their first way match this season.

We expect this match to have over 2.5 goals ft. The attacking display of Union St. Gilloise is more than enough to expect goals over 2.5.

Unionists scored a total of 22 goals in their 9 road trips this season. Moreover, around 55% of the matches played by Anderlecht saw goals over 2.5 ft.

Gilloise have allowed one in their past three away matches. But we are quite not sure about Anderlecht’s attacking potential as they have failed to score in three of the last four home matches. It’s a tough call for us to chose one from the above recordings.

This match is a great chance for the guests to maintain their unbeaten form. We like to back Union st. Gilloise to win at 2.50 odds as the main bet while placing the over 2.5 goals ft option as the alternative at 1.88 odds.